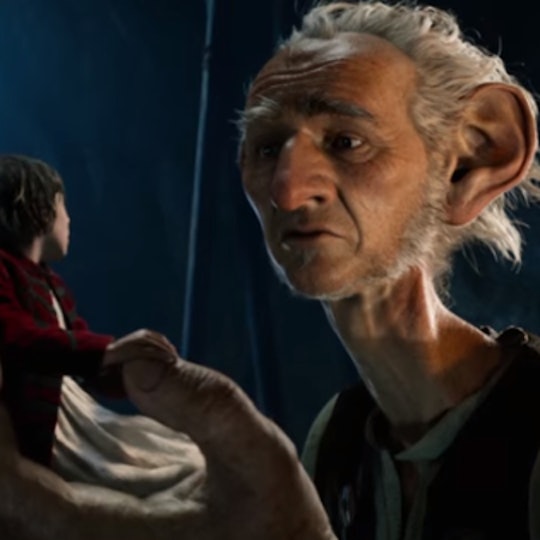 Why Doesn't The BFG Eat People? He's A Vegetarian

The BFG is not a story for the feint of heart, and that's just the way author Roald Dahl liked it. Imagine a world where there is a special Witching Hour, when humans sleep and the creatures that hide in their shadows are allowed to roam free. And these creatures, some of them giants, they want to eat humans. It's not exactly Toy Story, is it? Luckily for the plucky little orphan Sophie, the heroine of this tale, the Big Friendly Giant, or BFG, doesn't eat people. But why doesn't the BFG eat people, viewers of the new movie might ask (if you're the sort of person who prefers your giants to be of the human-eating variety)?

Well, when the BFG first meets Sophie, it does seem like it's all going to go sideways. After all, he does reach into her window and carry her off to the Land of Giants, smacking her down on the dinner table like the little snack she would be if she'd been kidnapped by one of the other giants. The BFG isn't too interested in gnawing on Sophie's femur or anything, though. It turns out, he's more of a vegetarian. Possibly even vegan (and how much would he love shopping at Whole Foods, right?).

For those of you who haven't read Dahl's 1982 novel The BFG, you're in luck. Disney has released a screen version directed by Steven Spielberg that critics are calling whimsical, beautiful, and warm.

As Matt Zoller Seitz, a reviewer for RogerEbert.com, said; This is a kind-souled movie about kind souls.

And the BFG is a particularly kind soul at that. Not only does he exist eating these spiky, disgusting vegetables called snozzcumbers that he hates (but that are the only vegetables that grow in Giant Country), he refuses to steal vegetables from humans. He goes around at night during the Witching Hour to blow good dreams into the ears of children as they sleep with his trumpet. He is frightened of so many things: the other giants who call him "runt," humans who might want to trap him and put him in a zoo, and even little Sophie when she first discovers him.

The BFG, which is out in theaters on Friday, promises to be one of those movies that teaches kids all sorts of lessons almost by accident. They will be so caught up in the magic on screen that they won't realize they are learning to be kind, to be comfortable in their own skin, and to stand up for what's right and honor their friends.

It will be as if the BFG is blowing good dreams into their ears while they're sitting awake in the theater. And what could be better than that?