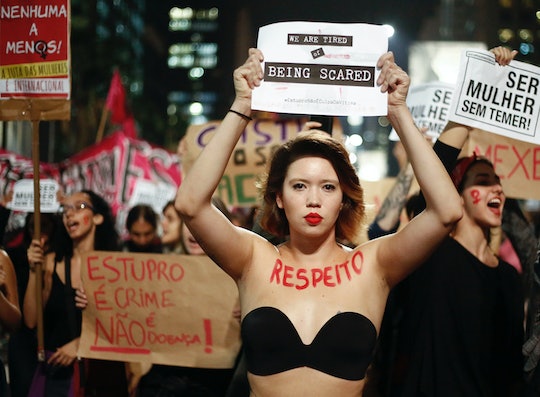 Why "Drunken Consent" Isn't Actually Consent, & Is Something We Need To Talk About

Brock Turner is a criminal who committed sexual assault. His lenient sentence for sexually assaulting an unconscious woman was a jarring slap-in-the-face to rape survivors, feminists, and non-white and privileged people everywhere. Because Turner is a prime example of how rape culture and white privilege are powerfully intersected. Though his case is not the first to expose such injustices in America's criminal justice system, the details and language surrounding his case prove why it's necessary to unpack what he stands for, and why "drunken consent" isn't actually consent. Not even the slightest bit.

Turner's victim was fully unconscious when he sexually assaulted her behind a dumpster in January 2015 outside a Stanford University fraternity party. Consent to sex, or any sexual interaction means an individual has voluntarily agreed to engage in a sexual activity. Without this assertion from all participating parties, there is no consent. And there is absolutely, positively, no consent if a person is too drunk to meaningfully consent, yet alone unconscious and incapacitated.

In Turner's victim's 12-page powerful letter, she explained how she learned about the details of her sexual assault, while she was unconscious, by later reading about it in the news:

I learned what happened to me the same time everyone else in the world learned what happened to me. That’s when the pine needles in my hair made sense, they didn’t fall from a tree. He had taken off my underwear, his fingers had been inside of me. I don’t even know this person. I still don’t know this person. When I read about me like this, I said, this can’t be me, this can’t be me.

"Lack of protest or resistance does not mean consent," the law states, according to NPR. "Nor does silence mean consent. Affirmative consent must be ongoing throughout a sexual activity and can be revoked at any time."

It should go without saying that Turner's victim did not give him affirmative consent to any sexual activity. But Turner's statements, his dad's statements, and an outpouring of letters of support for Turner show that society has a long way to go in battling rape culture.

According to the Guardian, the 20-year-old's letter to the Judge Aaron Persky, blamed the "party culture" of "drinking" for his sexual assault. His dad, Dan Turner, referred to his son's assault as "20 minutes of action," and his friend, a woman named, Leslie Rasmussen, blamed the assault on "party schools" and "camp-like university environments." It's no wonder why rape culture persists.

One of the most troubling parts of Turner's case is the fact that so many people have blamed alcohol. But, the thing is, people are conscious beings with the knowledge and wherewithal to know when they are drinking and what happens when they are drinking. According to the law in some states, consent is void if someone is drunk. The idea of a "drunken hookup" is something we cannot continue to condone — it is not a "gray area."

Frustratingly, society continues to try to say that you can sometimes consent to sex while you are drunk, even though the very act of being under the influence means you might be less aware of what you're saying or agreeing to. You might be less clear in your requests, and you might say something you didn't mean. Sex can be a great act, but it can also be dangerous, so why are we still saying that it's OK to do it drunk? Sex while drunk is sex without consent, and the sooner we stop dancing around that issue, the sooner people like Turner can no longer use alcohol as an excuse.

Rape culture continues to need the world's attention, considering a 20-year-old man can get away with only serving three months in jail for sexually assaulting an unconscious woman – while he, and his family and friends can still publicly declare he was only participating in a standard "party culture."