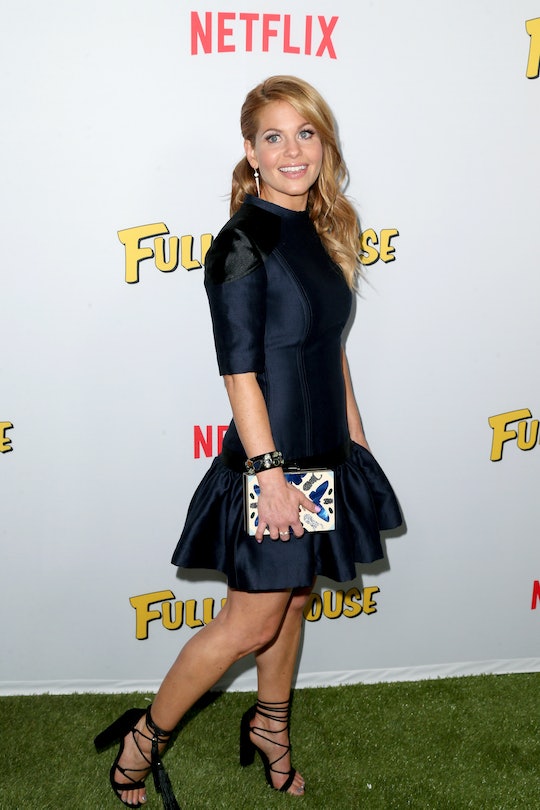 Why 'Fuller House's Single Mom Storyline Is So Important To Me

Like many '90s girls, I was super excited for the premiere of Fuller House on Netflix. I was basically an honorary Tanner growing up, and I couldn't wait to check in on my favorite Tanner-itos and Gibbler. I expected lots of nostalgia, laughs, and some terrible jokes from Joey, but I did not expect to burst into hot, ugly tears at the end of the first episode. Because watching Fuller House as a single mom left me incredibly emotional. I've been in D.J. Tanner's shoes, and it totally sucks.

When my daughter was two months old, I became a single mom. Unlike D.J., I wasn't widowed, but I mourned a different kind of loss: my partner and I separated. I was devastated, to put it mildly. Trouble had been brewing in our marriage since I was six months pregnant, but I never thought it would come to this: two months postpartum, still wracked with emotional and physical changes, a baby that depended on me for literally everything, and a partnership beyond saving. Like D.J., however, I felt completely overwhelmed by my emotions. I couldn't navigate any of my feelings. I had no time to mourn my marriage or the loss of my dreams, because I had a baby who needed me for everything. I was a mother and all of my time, effort, and energy had to go to her: keeping her happy and healthy. But I had no time to enjoy those early months of motherhood, either. I was devastated, heartbroken, and I felt like just a shell of my former self.

I was trying to brush my teeth as she screamed for me to hold her, trying to take a shower as she wailed in her bouncy seat, trying to get through each day as a single mom wondering how on earth I was going to keep it together.

So when I sat there watching the end of the first episode of Fuller House, I lost it along with D.J. She's rocking her son, the baby monitor sharing her words with her family downstairs. She cries that she can't do it on her own, that she's never been alone before, and she has no idea how to do it. And I couldn't help it, but I started sobbing, too. I was transported back to those first couple of months living with my mom. I was back in my childhood bedroom, sharing the space with a baby that screamed at all hours of the night and wanted to be fed constantly. I was trying to brush my teeth as she screamed for me to hold her, trying to take a shower as she wailed in her bouncy seat, trying to get through each day as a single mom wondering how on earth I was going to keep it together.

Would I be able to give her the life I wanted her to have as a single mother?

I couldn't even begin to count the number of times I cried out, "I can't do this anymore. I can't do this alone" in those first few months of parenthood. I'm sure I said it at least once a night as I rocked my crying daughter. I used to send really sh*tty texts to my ex, reminding him that not all of us were getting eight hours of uninterrupted sleep, that some of us were having to spend our days figuring out how to pay our parents back for diapers and wipes and groceries.

I worried about how I would ever be able to take her to Disney. Would I have the courage to manage a cross-country road trip with her? Would I be able to give her the life I wanted her to have as a single mother? Was I always going to be depressed and sad and miserable? I was terrified, and like D.J., I was convinced I was screwing everything up. My daughter didn't get my full attention, I spent too much time feeling sorry for myself and being heartbroken, and I stubbornly refused to accept any help.

Sometimes people act like they know what being a single mom is like when their partners are gone for the weekend. I see Facebook post after Facebook post from well-meaning friends who are "solo-parenting" for a night, and they always write things like, "Oh, doing the single-mom thing this weekend!" or, "I've been up and running since six this morning and have had to do it all; I'm beat." But when you're a single mom who literally has no choice but to do it all, those kinds of posts just drive you up a wall — at least they do for me. Being a single mom is so much more than doing all of the childcare or not getting a chance to sit down and play on your phone. It's doing it all because you have no choice but to do it all. My daughter depended on me for everything because I was the only one there to depend on. She had me, and I had me; we didn't have the luxury of anyone else.

There was no partner to come home at the end of the day and hear me gush about the cute thing my daughter Alice did. There was no one to lay in bed with at night and laugh about how big our little girl was getting and the dreams we had for her. I didn't have a partner to get up with Alice at 2 a.m. and 3 a.m. and up for the day at 6. I didn't have anyone to hold her while I took a shower, while I cooked dinner, or while I worked. I strapped her to my chest just so I could brush my teeth, and I literally never, ever got a break.

I'll never forget the relief I felt on the very first night I asked my mom to hold Alice so I could get a break from her hour-long scream fest. My mom put her arm around me as I sobbed, too, and told me, "This is what I'm here for. Why didn't you ask me to help you before?"

That's what Fuller House got right for me. They nailed it with that scene of D.J. crying in her bedroom. It was like looking through a window at my own life, because I'd been there so many nights. Over and over again, crying out that I couldn't do it anymore, that I was never going to make it on my own.

And, like D.J., I quit being stubborn and leaned into my family. I had only one choice: to make it work for my daughter and for me. I'll never forget the relief I felt on the very first night I asked my mom to hold Alice so I could get a break from her hour-long scream fest. My mom put her arm around me as I sobbed, too, and told me, "This is what I'm here for. Why didn't you ask me to help you before?"

Because up until that point, I hadn't asked for help because I felt like a big enough failure as it is. To ask someone for help? To actually admit to someone other than myself that I couldn't do it on my own? It's as devastating as what made me a single mom in the first place. But when I give in and accepted my family's help (a privilege I am lucky to have, and one that's not that ever lost on me), the relief I felt was palpable, and to be honest, it proved just one thing: that I was strong enough all along, I just needed a break. Full House taught me a lot of lessons, but the one Fuller House is sharing on single moms is more than necessary.