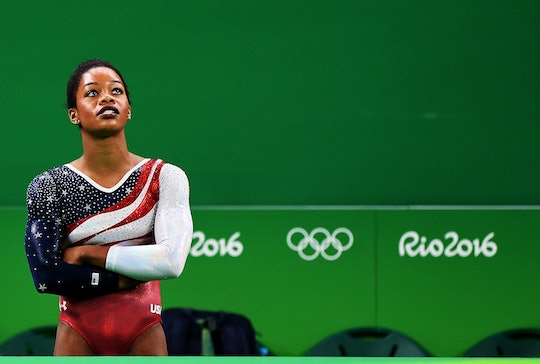 Why Gabby Douglas Is Still A Badass

Gabby Douglas is a record-breaking gymnast and idol to so many people. She's phenomenal, and undeniably so. The Olympic gold medalist became the first black woman in Olympic history to become the Individual All-Around Champion in the London 2012 Summer Olympics. It was an important time in American history, and an inexpressible moment for black girls and women who strive to break systemic barriers in their everyday lives. But still, Douglas has unfortunately been no stranger to extreme scrutiny and online harassment. And despite what the current social media backlash might tell you, Douglas is still a badass. Because the negativity can't erase her talent and impact.

At just 16 years old, Douglas not only took home an historic gold win as a black woman gymnast in the London Games in 2012, she also helped Team USA win gold in the team competition – making her the first American gymnast to accomplish both at the same Games. But even during her memorable feat in 2012, Douglas endured widespread criticism, and superficial critiques about her hair.

It's hard to believe that a young superstar athlete can sacrifice and dedicate their lives to a sport, and achieve so much success while proudly representing an entire nation – and yet their image can still be publicly reduced to criticism about their appearance, of all things. It's a perfect storm of deep-rooted misogynistic and racist ideals, mixed with online nothing-better-to-do trolls and flat out haters. And it's time for it to stop.

On Sunday night, Douglas, 20, responded to a reporter's questions about the criticism she received, such as the unbelievable questions about her patriotism, her facial expressions and relationships with her teammates, and again... more remarks about her hair.

"When they talk about my hair or me not putting my hand up on my heart or me being very salty in the stands, they’re really criticizing me, and it doesn’t really feel good,” Douglas said according to The Washington Post. “It was a little bit hurtful.”

It's sad that the 20-year-old gymnast has to absorb such hurtful comments as she's competing in the Olympics (kind of a big deal). But she has and she will continue to be a badass on so many levels. Here's a few more examples of her badass qualities:

Although Douglas did not advance to the all-around finals after achieving the third highest score behind her teammates Simone Biles and Aly Raisman, she still helped team USA win gold and played a crucial role in getting them to the top.

She Has Her Own Barbie

In a society that still struggles with maintaining positive representation for black women, Douglas' "Shero" barbie doll is a great way to celebrate the Olympian for her extraordinary accomplishments. It also provides more positive images of black girls and women on store shelves. And that representation continues to be important.

Douglas wrote a book called, Grace, Gold & Glory: My Leap of Faith with author Michelle Burford, in order to share her story and to inspire her fans to achieve their own goals in life. At such a young age, Douglas understands that she's an influential public figure, and she's using her amazing talent and fame to inspire others. I'd say that's pretty impressive.

Thankfully, despite the recent round of pushback, many around the world recognize just how impressive Douglas is, and they're speaking out. Twitter users are even using the hashtag #LOVE4GABBYUSA to show support for Douglas, and to acknowledge her greatness.

There will always be haters Gabby, but there will never be another Gabby Douglas. Keep showing 'em how it's done.