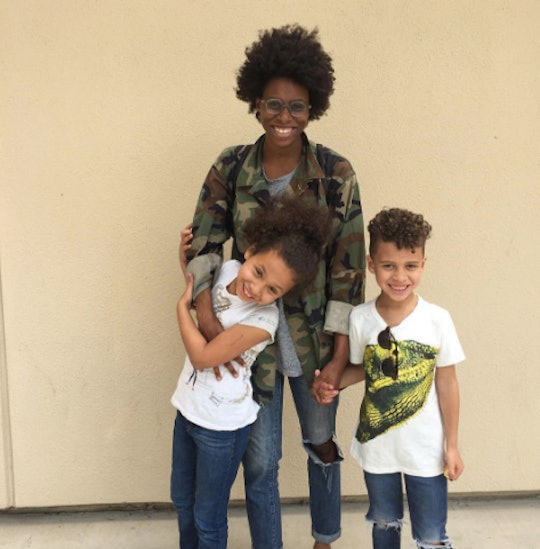 Why I Am Teaching My Children The Importance Of Self Care

As a grown adult, I've just learned the importance of practicing self care. Not only in my day-to-day life, but particularly when I, as a black person, experience trauma, which seems to occur more and more frequently in America. This week alone, not only did we have to watch, hear, and read about Alton Sterling in Baton Rouge, but not even 24 hours later, Philando Castile was shot and killed in front of his family. Earlier that morning, as I read about Alton Sterling's death, I posted on social media right away that I needed to be around other black people, that I couldn't sit online reading anymore about the horror the black community faces day in and day out. I needed to be surrounded by black love and acceptance. To feel it. To see it. To be a part of it. And so that morning I met with a friend, and then another one stopped by with wine, and we laughed through our tears. We felt the weight of being black in America on our shoulders, but it also felt like, because we were together, we could breathe. We spent the whole day grieving and taking care of ourselves, even though we didn't understand how or why this happened yet again.

The very next day, I put together a gathering and march because I couldn't sit at home anymore, reading comments on the internet about why black lives didn't matter. It's degrading to constantly experience such pain over and over again, only to have so many people still roll their eyes and carry on with their lives as if the safety of the black community just isn't an issue. I asked my partner to bring my two kids into the city so they could march alongside me, but my daughter didn't want to, and at first, she wouldn't say why. Later on she told me that she was afraid to be around policemen, and I understood her fear. Riley told me she "didn't want to see them" because she didn't "want them to hurt me."

The image of my 7 year old standing before me in an effort to protect me, not fully knowing what it meant, but knowing enough to understand that she should be afraid, completely broke me.

I've been pretty honest with my son and my daughter, who are 6 and 7 years old, respectively, about most of the shootings that have taken place in America where black people are killed, but I hadn't even talked to them about what happened to Alton Sterling and Philando Castile yet. But I remembered, right before our march began, how Riley stood directly in front of me with her arms out wide as a police car drove by us. The image of my 7 year old standing before me in an effort to protect me, not fully knowing what it meant, but knowing enough to understand that she should be afraid, completely broke me. My children don't even understand what they're feeling yet, but they're still mourning and scared. It was a reminder that, for as young as they are, I need to teach my kids the importance of self care, especially during times like these.

That's all we want right now: to feel close to the people we see as our anchors. Our home.

Teaching my children that they matter, that their lives matter, and that they are important is crucial right now. At a time when it seems like black and brown lives are disposable, I need to impress upon my son and my daughter the need to take care of and love themselves — especially when it feels impossible for black and brown parents to keep their children alive. So I make it a point to talk to my children about the ways in which we cater to ourselves. I ask them about the foods they like to eat when they're sad, and what paths in the woods they want to walk down. I encourage them to tell me what places they want to go that bring them joy.

They are, and will always continue to be, magic to me.

I remind them to breathe, wholly, completely, and deeply, because even though it is scary and overwhelming to be a black person in America today, and even though their futures are laced with uncertainty, I don't want them to ever forget that their value has never diminished. That they are, and will always continue to be, magic to me.

In the wake of all the news, my children and I have laid in bed together longer, started our mornings slower, spent more time cuddling and holding each other. That's all we want right now: to feel close to the people we see as our anchors. Our home. We've talked about why we have to be even kinder to ourselves right now, especially when it feels as if there is so much fighting and negativity surrounding the importance of our lives. My daughter likes to chant to herself, "I matter, I am important," and I pointed out how much that means to me that she sees herself that way. I pray she continues to see it and that she never loses that confidence.

I cannot put into words how proud that makes me, and how deeply their care for one another breaks my heart.

And though I've learned that are some things I need to teach them about self care, they've also come up with their own ways to support themselves and each other. They're already pretty kind to each other, but lately, they're even more so. So many more "thank yous" pass between them than have ever been exchanged before. They hold hands more often and my son has gone out of his way to tell his sister she's beautiful and that he loves her. In return, my daughter tucks her brother in at night and kisses his head before she leaves the room. I cannot put into words how proud that makes me, and how deeply their care for one another breaks my heart.

My heart hasn't stopped aching since the deaths of Trayvon Martin and Michael Brown. Since Eric Garner and Sandra Bland. Since Tamir Rice. I wonder at times if it will ever feel OK, and then I watch my children. I watch them slowly learn about what it means to exist as black and brown people in this country. I watch them process the information I give them. And I see their resilience. I see their strength. I watch them revel in their blackness. Of course, I'm shielding them from so much of the hate that takes place online, and even outside of the house, but my hope is that as I slowly pull the shield back, they will have learned to love and appreciate themselves. I hope their foundations will be unshakeable. Their strength, unstoppable.

I hope my children never stop trusting themselves, the people they surround themselves with, and the people they've descended from. We listen to a lot of hip hop, at the request of my son, and one of their favorite songs is "Alright" by Kendrick Lamar. On Thursday, amidst so much pain and heartbreak and horror, we blasted this song together, shouting as we jumped on the bed that we were going to be alright. And you know what? I believed them.