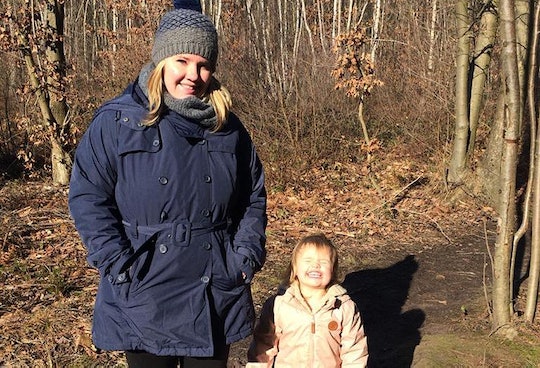 My toddler daughter has seen me in quite a few momentary raging fits, and I have worried that I might have broken some magical veil in letting her see that side of me. But I've come to understand the importance of what she's seen instead of the guilt I felt at first. In my journey to understand and manage the anger I've felt as a new mother, I can now accept the fact that it's not all bad that my child has seen my rage. She's seen it modeled in such a way that she can identify with — now and as she grows — and in such a way that will teach her how to resolve it. I believe that by letting my daughter see me get mad, I am improving her ability to keep her own emotions from overwhelming her.

Today, whilst getting ready to take my daughter to daycare, I got angry with the state of our cluttered entry hallway in our small apartment. I was trying to find my daughter's rain boots in the IKEA DRÖNA box we store our overflowing amount of various-sized shoes. The blasted pink things weren't sitting beside it easily accessible like they usually are. And as our coat rack, permitted by our landlord to be secured by command strips instead of nails, keeps falling down, there were a few coats, gloves, hats, and scarves to get out of the way first. On top of that, my husband had left a bag of crap from the car sitting right in the doorway, which was unfortunately glaring right at me as I sat on the floor in this process. (The helpful fact that this was a result of him kindly vacuuming out the car the night before was lost on me in that moment.)

"There's too much crap in here!" I snarled at my husband, "I hate this! You should have left this bag in the car, thank you very much." I threw the bag behind me into our bedroom and out of my way. My 2-and-a-half-year-old daughter stood near me assessing the scattered pile of winter accessories and shoes. The rain boots were nowhere to be found.

These are the kind of moments I'm working on, so that she can also see calmness modeled from the very start of whatever is frustrating me, but also understand that feelings are OK.

"Were they in her stuff we left at my sister's?" my husband suggested. "Probably so. We'll get them later," I huffed and conceded in handing my daughter the too-small red boots I'd finally got her out of "needing" to wear anyway.

"Green jacket or pink coat?" I asked her as I held them both up from the pile in front of us. "Geen jack-a," she said with a smile and offered me her arm without the struggle that occasionally accompanies getting out of the door. I took a deep breath in reflection.

"I really don't like clutter — uh — so many things in my way," I told her with a gesture to all the stuff around us. She looked me in the eyes.

"I'm sorry I got so angry about it and yelled at Daddy."

Without missing a beat, she accepted my apology. I looked up and winked at her father. We were on our way out the door. When she's a bit older, she'll probably take more notice of the reparative conversation my husband and I have as we walk down the street. But for now, she can see us give each other a hug and move on with the day.

These are the kind of moments I'm working on, so that she can also see calmness modeled from the very start of whatever is frustrating me, but also understand that feelings are OK. On the path to zen, I'm not carrying shame when I don't always get it right. And when my daughter blows up, which happens quite a lot at age 2, there are many times that I do appropriately deal with how her anger is making me feel, so she's watching and learning the other side of it, too. Even if it takes ten thousand more times of my helping her to cope with calm instruction or a peaceful act of redirection, it's all going to be worth it in the end — for both of us.

A key reason that postpartum rage is so misunderstood and wearing is that we believe it is "wrong," and don't see other women displaying it. Somewhere between 15 and 20 percent of women experience a postpartum mood disorder, per the World Health Organization. Personally, understanding how widespread the rage emotion is has been powerful in disarming my feelings.

My anger and the way I deal with it also gives me a way to show my daughter the things I don't actually prefer or want in life. I love helping explore the objects, experiences, and feelings that she loves or that I love, but it's equally important for her to understand that life also brings to us a healthy dose of negative experiences, displeasure, and things we absolutely hate as well. Figuring out when we want to say "no" in life is actually a brilliant way to understanding when we want to say "yes." And in my experience, the things I get the most angry about are the things that lead me to know the things I'm most passionate about. It's an honored responsibility to guide my daughter in this for herself as well. I'm learning that my journey will most definitely affect her journey. Rather than be scared of that fact (because what if I fail?), I'm more ready to let my success in this area be her success as well.

I'm not an expert, and it certainly isn't always perfect, but we're becoming a family who owns our emotions so that we may release them instead of sweeping them under the rug or fearing them.

And that's a victory I'm really proud of.