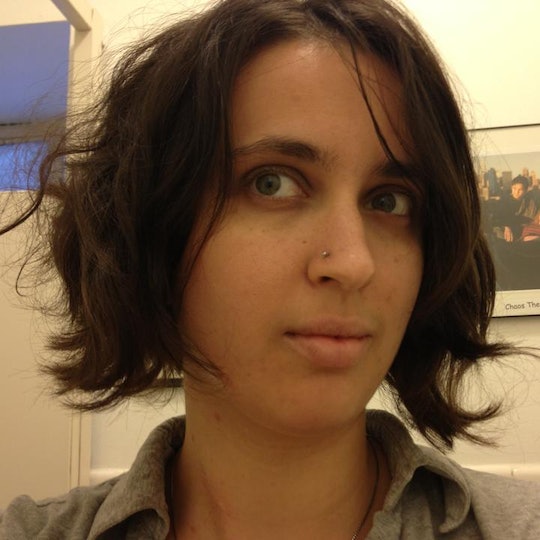 Why I Talk So Openly About My Pregnancy Sex Experiences

I’ve made no secret of the fact that I (gasp) remained a sexual being during my pregnancy. I’ve told audiences about it in four different states, and those audiences have, at different times, included my parents and two different former employers. A video of me describing attending an orgy in my second trimester exists on the Internet. I’ve written articles about my sex life while pregnant. But contrary to how it might seem, I don’t tell these stories out of a compulsive need to over-share or out of some form of exhibitionism; talking about these experiences is consistently nerve-wracking and I always have to gear myself up to do it. I fear being seen as immoral, irresponsible, immature, and so on. But that’s precisely why I talk about my pregnancy sex so frankly: to battle these stigmas. (For the record, I am a birth mother who placed my child in an open adoption, and my son lives with an amazing gay couple in my neighborhood. But I could just as easily have had the same experiences if I’d been planning to raise him myself.)

Just as a statement of pure fact, here are some things I did while pregnant: I had sex with two different male partners in the first month after I found out; I participated in a threesome with my best friend and her then-boyfriend, then went to a kissing party with her three nights later (a kissing party is exactly what it sounds like). After that kissing party, later that night, we were part of a six-person group sex experience in a “soft room” (again, it’s exactly what it sounds like). On a different occasion, I gave a hand job in a friend’s kitchen. I sorta-consistently started dating a guy in my third trimester and had sex in his office. I also performed burlesque routines while pregnant (once before my belly was visible, once while it was very visible) and posed topless while a filmmaker body-painted and filmed me just two weeks before giving birth.

Do you think less of me after hearing all that? Does any of that sound strange to you? Do you find yourself “worrying” for me, that I’m putting all this information in writing on the internet, that this article will come back to haunt me? Does it distress you that I did all this while I was pregnant?

If your answer to any of the above is “yes,” then you are part of why I keep telling these stories. There is, actually, nothing remarkable about a pregnant woman experiencing sexual pleasure with multiple partners. There is, actually, nothing remarkable about any woman experiencing sexual pleasure at all, with whomever and on whatever terms she pleases. It’s simply a thing that happens. In fact, it makes the world better; I am a better and happier person for having had these experiences. I take pride in the fact that I didn’t stop enjoying my body just because it was incubating a smaller one inside of it.

Or, let’s say you read that list of experiences and thought, “Hooray! I, too, have enjoyed myself in a sexual context!” Then you are also part of why I keep telling these stories. I want you to feel seen. I want you to feel less alone. I want you to know that your pleasure is beautiful, which is why I celebrate my own.

A pregnant body means “fertility,” which is sexy, but it also means “responsibility,” which is not. A pregnant body is also a blatant reminder that this woman has had sex, so better make sure her sexuality stops there! But you can’t and it doesn’t. I take pride in the sexual experiences I had while pregnant, even when they weren’t perfect.

Now, imagine I told you I'd been married to the man who got me pregnant, and that we had tons of sex while I was pregnant. Does that sound different than the experiences I've described above? Does it sound wholesome? Romantic? Are you OK with a pregnant woman experiencing sexual pleasure as long as she does it in the context of a heterosexual, monogamous relationship with the guy whose sperm it is? If so, then ask yourself while you think that. What is it that you assume to be superior about that scenario? Because I bet you anything that those assumptions are based in outdated stigmas against single mothers, and it’s past time for those stigmas to die. Women can be Ghostbusters and presidents now, and they can certainly have orgasms without husbands, incubating fetus or no.

Frankly, I didn’t realize that pregnant sex was so taboo until a couple years after the fact. My theory is that it’s because pregnant bodies are simultaneously hypersexualized and desexualized: A pregnant body means “fertility,” which is sexy, but it also means “responsibility,” which is not. A pregnant body is also a blatant reminder that this woman has had sex, so better make sure her sexuality stops there! But you can’t and it doesn’t. I take pride in the sexual experiences I had while pregnant, even when they weren’t perfect. Even when my pregnant body was fetishized, or deemed too “weird” to continue a sexual relationship with. It was all part of discovering and becoming myself, and I like myself a whole lot. So I'm going to keep talking about the sex I had while I was pregnant, and I'm going to keep feeling OK about it. And if you disapprove, that's really not my concern.

More Like This
I’m A Newly Single Mom. How Do I Get Over My Body Insecurity?
Everything You Need To Know About Missionary Sex During Pregnancy
Quotes For National Sisters Day To Give You All The Feels
Chrissy Teigen Gives a Cheeky Behind The Scenes Peek Into Her Pregnancy Glam Squad