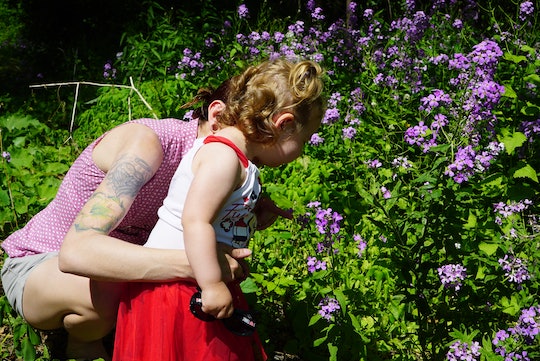 When I was pregnant, I was your quintessential oversharer. I posted a picture of my expanding midsection on Facebook every week. I let people know how much my daughter weighed (and how much I weighed) after every check-up, and I took my friends and family on a virtual tour through of every sonogram, every babymoon outing, and every craving. I was a proud mom-to-be. An excited mom-to-be. A still in shock, “oh sh*t, this is really happening?” mom-to-be. Today, almost two years later, not much has changed. I am still an oversharer. And as a writer, oversharing is sort of par for the course. I take self-indulgent selfies and share vacation photos from every trip. But I won’t post pictures of my daughter online — not on Facebook, Instagram, my blog, or any yet-to-be named social platform.

Posting photos of my kid can be risky. Dangerous. Plus, photos of my daughter belong to her, and I think that's really important. I want her to tell me what she feels comfortable sharing — and where. I know some may be thinking, who the hell does this sanctimonious chick think she is? Obviously what's right for one woman and one family may not be right for another — and I agree 100 percent. But in my family, and for my child, my husband and I have decided not to post any pictures showing her face. And we've gone so far as to ask friends and family to do the same.

I wish I could post a picture of her covered in spaghetti sauce or sporting a masking-tape mustache. I wish I could share photos of her in her Halloween costume or sitting on Santa’s lap or from our first family vacation. But I won’t.

The main reason we keep our girl's face off line is because we believe she shouldn't end up on Facebook, or anywhere on the Internet, until she's ready. Until she wants that. That choice belongs to my daughter, and until she can tell us otherwise, we'll keep her face off the web.

My daughter is already part of generation whose lives will unfold online. For her, the world is wherever the Internet can take her, and she doesn't even fully realize what that means yet. She'll share photos and have photos of her shared without ever fully comprehending the potential repercussions, and when she does, I want it to be because she's made the choice to put those photos out there. Not because her dad and her mom did.

From a safety standpoint, the more information put out there, the more personal information people and companies are able to store and collect. There have already been several reported cases where a child’s image(s) have been stolen off of Facebook and used in ads and, worse, on child pornography sites. And identity theft is a real concern. (Did you know all someone needs to steal your child's identity is their full name and date of birth, according to U.S. News and World Report? Yeah.)

Though data protection laws may guard against some of these worries, many do not. Add facial recognition technology to the mix, and our world (or more directly, the world my daughter will inherit) becomes infinitely smaller and, terrifyingly, less hers. (It's worth noting that, according to Slate.com, Google Glass has forbidden facial recognition apps, but they cannot prevent unofficial apps from launching, and in 2011, a group of hackers built an app that allows you to scan faces and immediately display names and basic biographical details, all right from your mobile phone.)

Aside from the real-world ramifications, do you remember that awkward class photo you took in fourth grade or that embarrassing pic of you that your mom still has? You know the one: You're half naked, sporting only underpants and your mom’s push-up bra, singing into the handle of a vacuum cleaner? (No? Just me?) Sure, these pictures are adorable, but when you're 12 or 13, they're downright embarrassing. I wonder how will exposing my daughter, physically exposing her and her body, to the opinions of other people affect how she sees herself. I wonder how these opinions will then shape her personality, her identity, and her body image. And I wonder how these images will affect how others see her. How will these pictures shape what others think of her? What future friends, future lovers, future teachers, and future employers think of her?

The truth is, I don’t know. No one really knows. Sure, all these likes and comments and shares may make her more confident. It may make her skin thicker. It may make her stronger. But what if it doesn’t? What if sharing her life with complete strangers before she even knows who she is somehow makes finding herself that much tougher? It’s hard enough being a kid.

For me, the idea of putting my daughter's face online is scary. Once her image is out there, I have no control. I can't police who sees it. I can't stop others from searching it, saving it, or sharing it. I can't trace where it goes. That leaves too much to chance. It's too much of a gamble for our family to take.

So, we won't. We'll keep our girl's face off the Internet. We've made our decision, and while it may not be right for everyone, it's right for us. It's right for her.