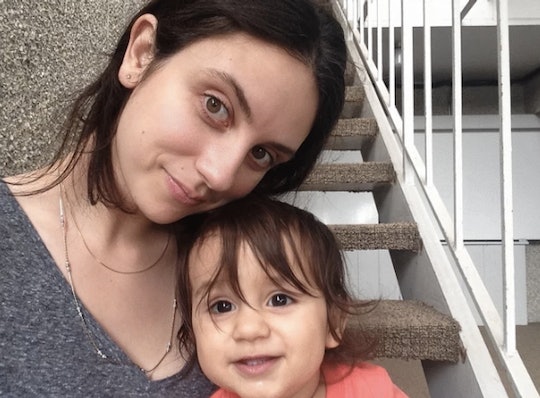 Why I'm Not Going To Treat My Son Like He's Special

Close your eyes and count to one. In that one second, 6,000 tweets were sent, 400 Instagram photos were uploaded, and 1,000 Tumblr entries were posted. Those posts come from me ... and the 3.17 billion other internet users across the world. It’s hard to feel special when really letting those statistics sink in, but that’s OK. Growing up, my parents made sure my brothers I knew that we aren’t all that special. It may sound harsh, but it proved to be a valuable lesson. Knowing that I’m not special is great because it reminds me that I’m not the center of anyone’s universe and redirects my time and attention to the other people in my life and my work. It's also the mantra I'm going to use on my son, Henry: He's not special, and there's nothing wrong with that.

Teaching a child that they’re not special sounds harsh and at odds with loving parenting, but it isn’t. My husband and I asked ourselves this question: Do we want to discipline Henry throughout his childhood, or do we want his boss to call him out for being selfish later? For us, the answer is clear: We want to do the work now.

Growing up with parents who told me I wasn't special wasn't terrible because I knew they loved me so deeply they were willing to challenge me. We had a strong foundation of love and trust, and they didn’t want me to grow up to be self-involved and arrogant. They loved me, believed I was special, but they helped me see that other people (future bosses, professors) wouldn’t see me as their "darling girl who could do anything." My future boss would want me to work hard and not complain when my special idea was shot down.

I have a distinct memory of turning in an essay to my mom in junior high (I was homeschooled) that I felt like I'd worked nonstop on and was proud of. It was a literature essay and I had a lot of opinions included in the paper. My mom gave it a brief glance and handed it back, with a question:

Why should I care about any of this?

Your opinion means nothing here.

I was hurt. I thought that essay was special. I started to cry because that’s what I did in junior high.

My mom, because she isn’t a jerk, explained herself: "Devin, your writing is only as good as your sources and research. And you are not a good source on American Literature in the late 1800s. What credibility do you have on the subject? No more than any other junior high student. So you need to do your research and use sources to prove your points."

It’s not that my thoughts and opinions didn’t matter, it’s just that in that particular setting, they weren’t the point. I needed to realize that a research paper is not the time or place to go on opinionated rants, especially without corroborating them with research. I needed sources and figures and facts that were smarter than me because they were more important to the piece. And that was really hard for me to accept. My opinions were dear to me and I wanted everyone else to think they were as astute as I did. I'd fallen into navel-gazing ways without trying to be insufferable, but my parents saw it and shut that crap down.

Then I went off to journalism school and thanked the heavens that my parents were tough on me because, damn, my journalism professors were even worse. If there was an ounce of opinion in a story, or an unsourced fact – I failed. It was easy to feel like a special flower at home, but in journalism school I was just one of the minions trying to stay out of the wrathful path of the overlords. Some of my classmates struggled with this because they believed so strongly that they were special. Because that’s all they had ever been told. In high school they were at the top of their class, articulate, editors in chief, recipients of a bunch of awards, and always kept a moleskin in their hand to rep their journalism cred. But I had what I felt was the secret weapon. I knew I wasn’t that special, and that made me realize how much I valued respect, research, and the ability to think deeply about my opinions before sharing them. Eventually I realized the professors weren’t overlords, they just didn’t want to deal with arrogant freshmen.

I didn’t suffer under the illusion that I knew everything and I could handle harsh criticism.

When I was one of the newbie page designers at my newspaper job, I kept my head down and worked. I saw other designers who came in with me get upset when their ideas weren’t universally loved or pissed off when they had to design the boring paper that night. I knew I wasn’t the best designer and sometimes felt like the dunce in the room because my designs were pretty basic, but I got great feedback from my bosses. I didn’t suffer under the illusion that I knew everything and I could handle harsh criticism. (Even when it hurt.) I didn’t value my ideas as superior to any other ideas simply because they were mine.

Not being special doesn’t mean being a doormat. It just made me reserve judgment until I couldn’t any longer, and then I felt I knew enough to share a well-formed opinion. That worked better than constantly blathering on about my oh, so wonderful ideas. I'm always brimming with ideas and opinions, but I don’t view them as precious (because they aren’t). Yes, I am my own unique person … but let’s be real: I’m not that special, and even if I was, I wouldn’t want to be a pompous jerk about it. I know people who are truly special and amazingly talented at something. I bow at their feet, and always want to ask, “Why are you friends with me?” Some of them are the most humble people I’ve met. (Others are insufferable.) And if those people can be humble about their genius, I sure as hell need to be humble about my ordinary level of smartness.

I know that everything I have, I have because I worked hard and made myself available for opportunity. I don’t deserve anything, so what I get delights me. No one can take that away from me.

My parents’ approach instilled in me a deep sense of self, but an even deeper dedication to avoiding arrogant thinking. I wouldn’t want to think that I’m really special. It sounds like a burden. If my parents only told me how special I was and then I met someone who didn’t share that opinion, I’d have a huge insecurity complex. I’d be constantly trying to be more and more special so I could deserve good things. I know that everything I have, I have because I worked hard and made myself available for opportunity. I don’t deserve anything, so what I get delights me. No one can take that away from me.

That’s all well and good, but now I have a pretty perfect son. He’s almost 2 and it was only just recently that I started to see his human side come out. Before that, he was 100 percent angel. I want to be a fire hose of praise, constantly showering down on him, but I don’t want him to grow up to be an assh*le. How do I help him see his innate goodness and unique self, without becoming self-obsessed?

We'll continue to see the wonderful person our son is, while at the same time guiding him to a sense of self that isn’t self-obsessed.

I focus on praising his efforts in the right way, by teaching him that he’s capable of so much – but that he has to get up every day ready to work on it. I shouldn’t fixate on praising his grades or academic pursuits, but I shouldn’t praise every effort he takes either. It’s not the effort in an of itself that’s worthy of praise, it’s his continued efforts toward learning and growing (even in the face of challenges) that are praiseworthy. A recent Quartz story says, “The key to instilling a growth mindset is teaching kids that their brains are like muscles that can be strengthened through hard work and persistence.”

Henry needs to know that his parents love him in a way beyond his comprehension, but he also needs to know that we expect him to care less about how special he is, and more about everyone else. Yes, we'll continue to see the wonderful person our son is, while at the same time guiding him to a sense of self that isn’t self-obsessed. It’s a big picture plan that requires thought, tenacity, and flexibility as we all grow together. I, for one, am excited about it.

A parent’s love is pretty damn near unconditional, but it’s unique in a person’s life. My son’s boss, professors, and co-workers will like him conditionally – is he kind, is he hard working, is he humble? – and it’s our job to prepare him for that.