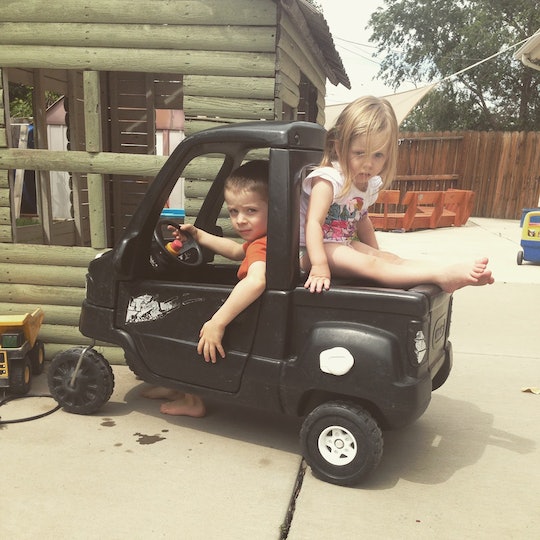 When I found out I was pregnant with a little boy, I had a lot of thoughts on how I’d raise him. I knew without a doubt that he’d be a feminist, and that I wouldn’t put him in a gendered box. I wasn’t shy about painting his nails when he asked me to (a phase he too quickly outgrew) or getting him a babydoll when his baby sister got one. I wanted him to be exactly who he was, whatever that meant to him. But my son is not a well-rounded child who loves having a tea party as much as he loves bug collecting. My son acts "like a boy," and I’m honestly 100 percent OK with that.

No matter how much I encourage him to explore any and every interest he has, he’s always been drawn to traditionally “boy” things. Trucks, guns, dirt, superheroes — he is all machismo in his play. Does that mean he’s doomed to a life of misogyny and mistreating women, though? Not by a long shot. Raising a boy has taught me that liking “boy things” and having a strong sense of respect for women are not mutually exclusive concepts.

It’s true that many of the boy-centered toys come with a strong dose of misogyny, excluding girls and claiming superiority, especially in superhero culture. Anything traditionally masculine is dominated by images that focus on men while women are left out, marginalized, or worse, seen as a prize or reward. But does my son liking Batman have to mean he buys into the misogynist aspect of superhero culture? I don’t think so.

What he sees in real life everyday contradicts those messages so strongly that they never even have a chance to take hold.

There are so many ways we keep the misogynistic influence of boy’s toy marketing from creeping into his psyche. We can be intentional in evening out those messages with ones which empower and uplift women. We can curb any behavior that excludes women. We can discourage the notion that girls play a lesser role in society. But truth be told, all of that may be overkill.

There is no one in his life, no one he looks up to or respects, who projects the idea that women can’t do anything they want.

Never once has his traditionally boy-centered play resulted in any sort of gendered bias against his sister, or myself, or any other girl for that matter. It’s not because the subtle sexist messages aren’t there in the advertising and culture surrounding his toys. They undoubtedly are. But what he sees in real life everyday contradicts those messages so strongly that they never even have a chance to take hold.

He sees a family dynamic that shows equal respect for boys and girls. Every woman he knows is strong and capable and self-possessed. He has a mother who won national trophies in martial arts. He has one grandmother who was a British armwrestling champion and another who’s an avid mountain biker. There are engineers and writers and caretakers and entrepreneurs among us. There is no one in his life, no one he looks up to or respects, who projects the idea that women can’t do anything they want.

What my son sees in the way my husband treats me and his sister speaks far more powerfully to the man he will become someday than the fact that he plays with superheroes or toy guns.

My son is also surrounded by men who have married and raised strong women. He doesn’t hear sexist quips. He doesn’t see women being undercut or discouraged for their opinions and ideas. What he is exposed to consistently is the idea of equality, and that is far more important than the few subtle messages of sexism that come from less persuasive mediums outside his family.

Blaming toys and games and culture for misogyny is understandable, but for me, I think it misses the point. Yes, we may internalize values fed to us through society, but we learn so much more from the examples in front of us. What my son sees in the way my husband treats me and his sister speaks far more powerfully to the man he will become someday than the fact that he plays with superheroes or toy guns.

He can play with boy things all he wants. The toys he plays with won’t determine the man he becomes. He can be a guy's guy all he wants, but he can also be a feminist. The example of those he loves and respects carries far more weight than a plastic figurine — and his dad and I will make sure he knows the difference.