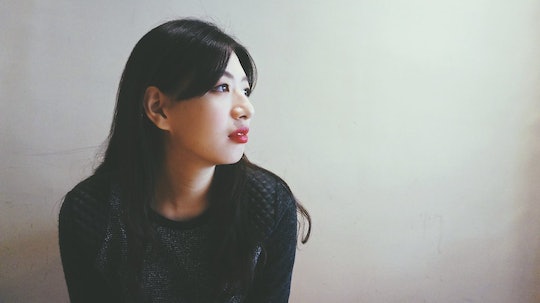 As of Wednesday, there's still no official vote to repeal and replace the Affordable Care Act. The GOP must tread carefully to push its round two replacement plan after the American Health Care Act, dubbed "Trumpcare," crashed and burned without even getting a full House vote. As many experts have noted, the ACHA basically guts the ACA, costing Americans more for less care. For some specific populations, these costs could approach exorbitant pre-ACA insurance rates, especially for groups like moms with postpartum depression. Here's why insurance cost moms with postpartum depression more before Obamacare.

When the Affordable Care Act became law, mental health coverage legally became an essential benefit, meaning that health insurance carriers were required to cover a variety of services related to mental health treatment. For clarity, it's not like the ACA made such services free: Patients could still be on the hook for office and prescription co-pays, as well as other deductibles for these services.

But prior to the ACA, it was entirely possible for an insurance carrier not to cover any mental health services at all, leaving patients to pay out of pocket if they needed these services — and they don't come cheap, either. Office visit fees and medication costs add up over time.

TalkSpace, an online mental health therapy platform, notes that traditional therapy session costs out of pocket can be anywhere from $75 to $300 or more per session. Postpartum depression affects as many as one in nine women, according to the Centers for Disease Control and Prevention — and there is no magic number of sessions that a woman experiencing PPD might need. That also doesn't take into account whether she needs medication to help treat her PPD, either.

The American Academy of Family Physicians recommends antidepressants in tandem with talk therapy as part of a two-pronged approach to treating postpartum depression. Medications like Prozac and Zoloft are often recommended for their efficacy and tolerance when treating PPD. But prior to Obamacare, if these drugs weren't covered as part of broader mental health treatment, a woman with PPD could pay anywhere as much as $400 for one month's supply of Prozac, according to website Drugs.com.

That's what makes the current health care debate so critical for mothers. The MacArthur Amendment, which is the GOP's round two version of trying to replace Obamacare, would allow states to opt out of mandating essential benefit coverage, which means health insurance companies can return to pre-Obamacare days and refuse to cover mental health services. And the last thing we should be doing for mothers with PPD is to burden them with treatment costs so high, they don't end up seeking the mental health care they need.