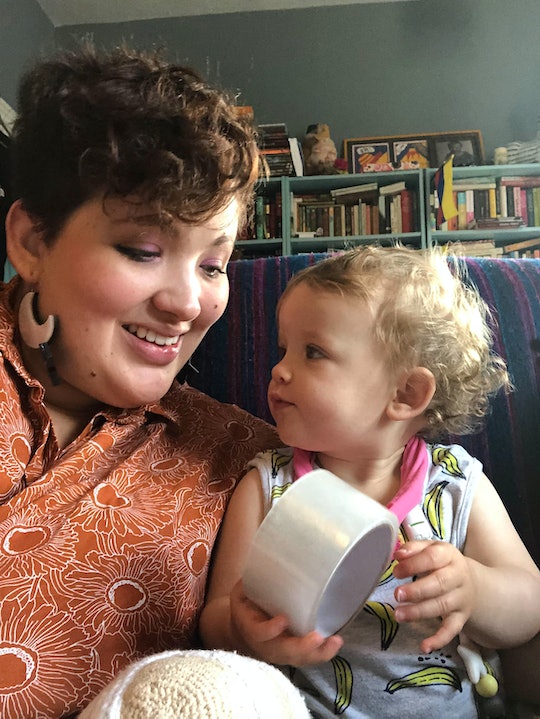 Why Is 1 Year The Magical Finishing Line For Breastfeeding?

"OK, I think this is the best birth control option for you," says a nurse practitioner who is scrolling through some kind of database on her computer. I am 14 months postpartum, and having tried and failed to gel with the implant, I am considering going back on hormonal birth control pills. "You're not still breastfeeding, are you?" I quelled the frustration in my voice, resisted the brewing eye-roll on my face, and uttered a deadpan "yes." "Oh," she replied in genuine shock/horror. "Uh, you know breastfeeding for over a year isn't necessary, right? You should've stopped ages ago!" And then, "Anyway, I'll have to look for a different birth control option for you in that case."

Since my youngest turned 1 a few months back, I've felt an increased pressure to stop nursing her. In yet another manifestation of the "there's just no winning in motherhood" complex, there is tangible judgement directed at me for "not moving on." For "trapping myself." For "making my baby clingy." For "failure to close this chapter." At least a few times a week, particularly when nursing in public or speaking to a medical professional, I'm the recipient of such unsolicited sentiments, all of which seem to suggest that I've hit the magical finish line for nursing and really need to stop.

The UK, where I live, has some of the lowest breastfeeding rates in the world, and the lowest of the Western world, with only 1 percent of people still nursing at or after six months, according to UNICEF. There are a lot of reasons for this, including a lack of breastfeeding support at and after childbirth, shorter and shorter maternity leaves (particularly in lower-income families where women often need to return to work faster), and, quite frankly, getting a heck of a lot of sh*t for daring to feed one's child in public (or at all).

“[Nursing parents in the UK] don’t feel confident, they don’t feel like they can go out and breastfeed in public despite the fact that it is law that women have the right to breastfeed anywhere in this country,” Kate Quilton, presenter of the documentary Dispatches: Breastfeeding Uncovered, told The Independent in 2018. “Culturally it still feels like we’re a fair few decades behind and people do struggle with it.”

Of course, not nursing one's infant comes with its own stigma; with criticisms of being a "lazy" parent at best and of not caring about the wellbeing of one's child at worst. In terms of my own experiences nursing two daughters over the last three years, there's been no feeling of judgement quite like that of breastfeeding for what is considered an "extended" or simply "unnecessary" period of time.

Ironically, by the time my eldest turned 1, I was more than ready to stop breastfeeding. Thankfully, she began self-weaning shortly after her first birthday and this chapter of our lives was entirely closed by 15 months. From day one, nursing her had been a struggle. She couldn't latch properly for three months after birth. Because she lost what is considered too much weight in her first days with us, we had to wake her every two hours for extra, essentially forced, feeds. There were times when my supply drastically reduced. There were periods, later on, when the biting got so bad that I wanted to quit right then and there. It was always a little bit hard — and, in retrospect, we all might've fared better if I'd called it a day a little sooner than I did.

With my youngest, who is now 14 months old, things couldn't have been more different. A natural latcher from the get-go, our only struggle to date has been that my over-supply after birth led to a faster flow than she could handle back then. She was colic-y as a result, which was admittedly pretty hellish, but in the grand scheme of things, this stage was only brief.

Today, she only nurses first thing in the morning and last thing in the evening, and those moments are precious to me. Although she is young, she is already fiercely independent. She is often happy to play alone. She participates in only brief snuggles throughout the day. She just gets on with things. Nursing her provides me with the rare opportunity to hold her close. To look at her face for longer than 30 seconds. To reflect on all the good and unexpected things that she has brought into the world with her. To cuddle without her desperately trying to run away to have the next adventure.

And, I think, she loves it as well. Nursing is how she starts and ends her days. There have been a few times our routine has been disrupted, and the whole trajectory of her day, and night, has been thrown for a loop. As most parents can probably attest, there is nothing quite as precious, as grounding, as sanity-preserving as sticking to the routine that clearly benefits your child (and subsequently, that benefits you).

I do not believe that anyone outside of my daughter and myself has the right to dictate when these moments, this schedule, and this framing for the day have run their course. I do not believe there is a magical finishing line at all — at least not a universal, one-size-fits-all deal. Instead, it is up to each of us to figure this stuff out.

I didn't understand the 'bonding' people spoke about experiencing while their babies were latched onto their bodies.

For some, there might be no starting line at all, and that's OK. For others, six weeks could be the sweet spot. For others still, maybe six months. For me, maybe it's a year and a half. Maybe it's two. Maybe there'll be some kind of change in me next Monday and I'll suddenly feel done. I'm not sure yet, but what I am sure of is that it's no one else's call to draw the closing line on my nursing journey.

When breastfeeding works (and again, it doesn't for everyone, and this is perfectly fine), it can yield a hell of a lot of joy. I didn't really understand this until having my second child. I didn't understand the "bonding" people spoke about experiencing while their babies were latched onto their bodies. I certainly didn't understand the empowerment some other nursing parents expressed — as if the whole process made them feel strong and capable and super-powered. This time, though, I feel it all.

I'm incredibly lucky in that I work from home, maintain a fairly flexible schedule, and have been able to nurse both of my kids on demand. I do not doubt that these privileges have made my breastfeeding experiences far more straightforward than they might be otherwise. I'm also pretty grateful that the immediate people in my life, those I'm closest to, don't harbor any judgement toward my choice to nurse for longer than what is "average" or "normal" where we live.

To all of those who do, however, my response is ultimately simple. My body, my baby, my joy, my rules.

If you love nursing, if your child obviously does, if the thought of stopping doesn't feel quite right, at least not yet, don't let anyone tell you to "hurry up." Parenting can be messy, loud, unorganized, and anxiety-inducing. Why should we let anyone rob us of the brief moments of serenity we can find in a day that is usually packed with stress?

More Like This
How To Breastfeed A Baby With A Cleft Lip Or Cleft Palate
Breastfeeding Twins: Everything You Need To Know
6 Ways To Fix A Shallow Latch So Your Baby Can Nurse Properly
Stop Talking About Formula Feeding Like It’s Always A “Last Resort"