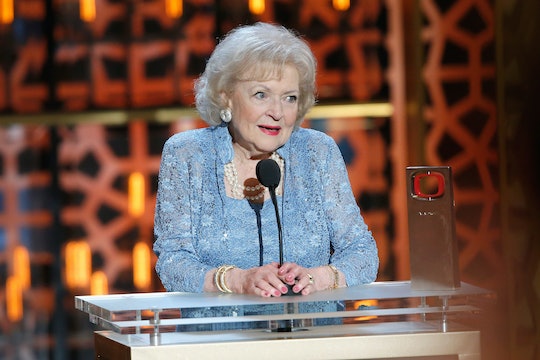 We're all getting paranoid these days, guys, and can you really fault us for that? 2016 has basically beaten the heck out of all of us. What with losing so many of our favorite people and gaining a few "stars" some of us could have done without (I'm not naming any names... but you know who you are), it's no wonder we're all losing our minds. So when people start wondering why Betty White is trending on Twitter, can you blame them for thinking the worst?

Perhaps it was the tragic news that Carrie Fisher, our Princess Leia and feminist icon, died of cardiac failure on Tuesday at the age of 60, that had some people worried. Because Carrie Fisher felt (to some of us) like the embodiment of the indomitable spirit. Which got us to thinking of other feisty, spirited, fearless women who we love, whom we also would hate to lose. And naturally, Betty White came to mind. On the heels of losing Carrie Fisher (and please, can we not forget George Michael, my very first, very best crush whose death on Christmas Day should not be forgotten either?), I don't think the world could cope with losing our Betty White.

And so, Twitter has suggested we should take drastic steps to protect the 94-year-old Golden Girls favorite. Because we simply. Cannot. Take. Any. More.

As most of us know, Betty White has become synonymous with a sort of ageless cool. While she was a regular character on TV throughout the '70s and '80s, it was her role as the silly, sweet, accidentally-funny Rose Nylund on the hit sitcom The Golden Girls that truly made her a household name. The show ended its run in 1992, when White was already 70 years old, and for many actors, that could have been the end of a pretty satisfying career. As we now know, Betty White is not "most people".

While some actors hope for a second act or even maybe a third act, White is well into her fourth act. She has enjoyed six decades of acting, starting in 1952, when White was a regular game show fixture, up until today. She saw a resurgence in her career in 2009 when she played opposite Sandra Bullock in The Proposal and was the oldest person ever to host Saturday Night Live in 2010.

No wonder we are all desperate to keep her around — who the heck is cooler than Betty White? So yeah, I'm totally on board with Twitter protecting White for us. Let's say a little round-the-clock surveillance to start, just until 2016 has taken a hike and we can all start fresh with 2017.

It's only five more days. It's time to keep her secret. Keep her safe.