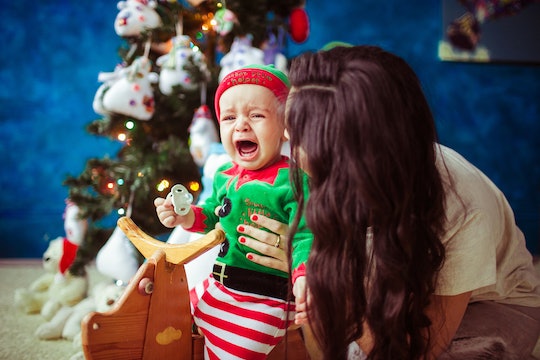 If Your Birthday Is On Christmas, This Is Why You're Actually Pretty Unusual

Sharing a birthday with Christmas seems like it would be a fortuitous coincidence, because who else gets to enjoy Santa dropping in with presents to commemorate their birth? Well, increasingly very few people. While the month itself sees no shortage of newborns compared to other months, and maternity wards encounter some of the busiest days of the year in the days immediately following Christmas, the holiday is becoming a pretty rare birthday. Even leap year birthdays are more common!

As the Telegraph reported, December 25 ranks dead last with an average 6,574 births, placing it behind Christmas Eve and even Feb. 29, which comes around only once every four years. The question is... why?

One theory is that people are actually getting it on over the holidays to conceive babies that will be born in September, the most common birth month. This data-driven graph shows that most common birthdays fall in the middle of September, with Sept. 9 being the most popular birthday of all (an average of 12,301 births!), which The Daily Viz claims would be conceived between December 17 and 27. Apparently when there's lots of time off, parties, and festive tipples to enjoy, things heat up between the sheets. Unfortunately, a Christmas birthday's presumed conception date of April 3 doesn't provide the same social opportunities to enjoy more alone time with your beloved as other dates on the calendar.

The graph's author, Mark Stiles, also suggests that with the rise of planned births, doctors and parents are careful to avoid scheduling inductions or cesarean sections for Christmas Day. As Scientific American explained, there's been a marked shift in the last few decades from largely spontaneous births to babies being born during business hours. Nearly half of all American births these days are either scheduled cesarean sections or inductions, the article says, so it only makes sense to perform those procedures when your doctor's on the clock — and they likely won't be on Christmas. Thanks to this trend, births peak at 8 a.m. on Monday mornings and are driven by scheduled cesarean sections to start the week. The article also corroborates Stiles' assertion that people are more likely to conceive babies during the cold months when everyone is either partying over the holidays or locked inside together.

While Christmas babies tend to have mixed feelings about competing with the holiday for a little birthday love, according to The Globe and Mail, there are undoubtedly good things about being born at the end of the year. Though they seem to be a dying breed, Slate's L.V. Anderson makes a compelling case for Christmas kids. First, she says, while the rest of us plebes end up at work or school on our actual birthdays, those who were born on or around Christmas are more likely to spend the day exactly how they want when they're grown. They already have the time off, family is near and there's a whole lot of festive energy that can be expelled on the birthday baby. She writes, "For the indolent, among whom I count myself, having a Christmas birthday is the best-case scenario: maximum merriment for minimum effort."

There are benefits for their families as well. As Capricorns, people born on Christmas are dutiful, loyal and family-minded, according to Astrostyle. They are very ambitious and resilient, usually choosing the most efficient path to success over forging to paths to their goals. So while people are choosing to avoid "burdening" their child, themselves and their doctors with a Christmas baby, there are plenty of reasons to embrace it as well.

More Like This
13 Creative & Cute Mother’s Day Baby Announcement Ideas
A C-Section Actually Doesn't Take As Long As You Think, According To Experts
12 Last-Minute Vacation Spots For Memorial Day
43 Instagram Captions For National Brother’s Day That Say It All