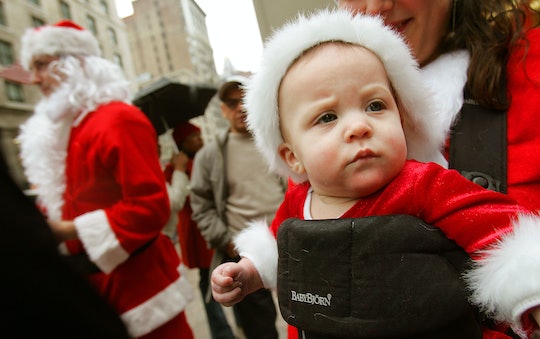 My older sister always lamented being born the day after Christmas. While it was always guaranteed she'd be off from school, and that the food would be aces, she felt as though her birthday was swept aside in favor of Christmas celebrations and New Year's prep. My mother, however, would wax poetic about going into labor on Christmas Day, and how my father asked her if she was kidding. Because obviously, no one would dare mess with the dessert course. Alas, similar stories are told the world over, but these five fascinating facts about December babies might begin to sway your original thoughts about being born during the most wonderful time of the year.

Whether these facts are based on where you or your child's birth places them astrologically, or what science says about being born during the month of December, it's clear that these winter babies have a lot going for them. Being born in December can have an effect on more than just your ability to have an outdoor birthday party; statistically, it's been shown that birth month can have a quantifiable impact on how you perform, how healthy you'll likely be for the duration of your life, and even how you're educated. As it turns out, the benefits of having December as a birthday month could be worth sharing the spotlight with a major holiday.

More Like This
30 Adorable Baby Halloween Costumes, From Animals To Avocados
The Best Halloween Family Pajamas To Match Your Boos
How To Get Boogers Out Of A Baby's Nose
Can You Mix Breast Milk & Formula? Experts Weigh In

This article was originally published on November 30, 2018