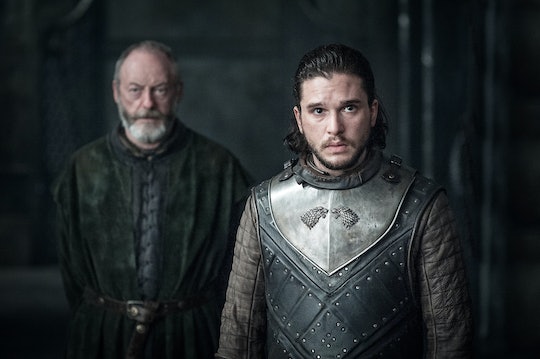 The Season 7 finale of Game of Thrones was full of revelations. When Sam arrived at Winterfell after ditching his position in Oldtown, he and Bran sat down for a chat that finally put all the pieces together about Jon's true identity. Audiences learned that Jon was Lyanna Stark's son in Season 6, but "The Dragon and the Wolf" explicitly confirmed that he was also the child of Rhaegar Targaryen, former crown prince and Daenerys' older brother. And the reveals didn't stop there: Sam and Bran also figured out that Jon's real name was actually Aegon Targaryen. But why is Jon's name Aegon Targaryen on Game of Thrones?

Aegon is a popular choice in the Targaryen dynasty, with many former kings sharing the name. But the situation with Jon is a little bit more complicated than that. Though Jon was Lyanna's first child, he wasn't Rhaegar's; Rhaegar had already been married to Elia Martell of Dorne and had two children with her, Rhaenys and (wait for it) Aegon. What would possess Rhaegar to name his second son after his first, especially considering they weren't very far apart in age? Is this like how Carole Radziwill just names all her pets Baby? Could Rhaegar not think of a new name?

Based mostly on information from the book series rather than the show, it seems like Rhaegar appreciated the name's kingly associations. In A Clash of Kings, Daenerys sees a vision of Rhaegar with his wife and newborn son (whether it's Elia or Lyanna seems unclear, though it's generally assumed to be Elia) in which he mentions the child is named Aegon, remarking, "What better name for a king?"

The first Targaryen to conquer Westeros was named Aegon, with many notable Aegons following throughout the years. If Rhaegar wanted to set his son up for future glory, perhaps he thought that name would be the best choice to guarantee it. Annulling his marriage to Elia so that he could instead wed Lyanna meant that Rhaenys and The Other Aegon were illegitimate, so they would no longer have been able to inherit. Rhaegar was banking on baby AeJon, so he saddled him with a name that would fit his destiny.

Rhaegar was obsessed with using his children to fulfill prophecies. The whole reason he wanted to have three kids was because he believed "the dragon has three heads," like Aegon the Conqueror and his siblings Rhaenys and Visenya. Targaryens coming in threes have been significant throughout Westerosi history. Elia was unable to have a third child, so enter Lyanna and baby Jon. Rhaegar also believed one of his sons was the Prince That Was Promised, which could be another reason that he wanted to give the child a name with a lot of significance.

Still, Rhaegar doesn't come out of this whole naming situation looking very good. While he was running off with Lyanna, Elia and his children were being kept captive in King's Landing, where they were eventually slaughtered by the Mountain. Did Rhaegar even know his first son Aegon was dead before he reused the name with his second?

Then again, it's also possible Lyanna made the decision to name AeJon herself. Rhaegar was presumably dead by the time Jon was born, having been killed by Robert Baratheon in the Battle of the Trident, so perhaps Lyanna wanted to pay homage to her husband's family (dead son included) in her choice of name. Either way, it's definitely odd. It might be a good idea to avoid the uncomfortable implications by continuing to call the King in the North Jon for now.