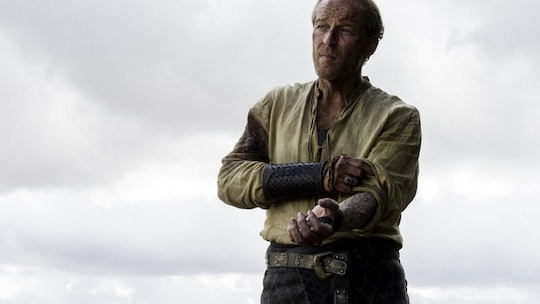 Jorah Was Tasked With An Important Mission On 'GoT'

Even if the Season 7 premiere of Game of Thrones couldn’t show us what Melisandre or Gendry are up to, fans still got a glimpse into all of the important players, including Jorah Mormont, and that’s all we can hope for, right? But instead of standing by Daenerys’ side, he was locked up in quarantine, so why is Jorah at the Citadel on Game of Thrones?

The last time he saw Daenerys, she told him to find a cure for his spreading greyscale before he came back to her. Clearly, Jorah seeking help from the maesters at the Citadel was his way of finding help the best way he knew how, short of finding a red priestess to try and stop it from spreading any further.

But how did he even get there in the first place? Oldtown is in the southwest area of Westeros, even more far south than King’s Landing. Jorah came to Westeros from across the Narrow Sea, where Daenerys and company just traveled from themselves. My guess is that, much like Arya paid her way on a ship to Westeros, Jorah did the same. But since the rules and regulations of the Citadel on Game of Thrones are still pretty foggy and the place itself is new to viewers, it’s difficult to say for certain how he was admitted, so to speak, into one of their hospice cells.

There’s the chance that he used his last name, Mormont, for clout of some kind. Way back in Season 1 when Jon was first welcomed to the Night’s Watch, he trained under the former Lord Commander, Jeor Mormont, who was Jorah’s father. Even though Jorah himself was a stripped knight, using his family’s name might have gained him entry to the Citadel and to the maesters there.

Sam has been spending a lot of time reading up on dragonglass, and I couldn't help but notice that one of the books in the season premiere might be the answer to Jorah’s biggest problem. The words "Stone Sacred," "dragonglass," and "cure" were seen on the same page, leading some fans to the hope that if Jorah can leave the Citadel and make it to Dragonstone, where Daenerys and her army just landed, he might be able to find a cure there in the form of dragonglass itself. If you remember, when Stannis’ daughter Shireen was living there, her own greyscale managed to stop from spreading beyond her face, so Sam might come in handy more than he thinks.

So basically, dragonglass is kind of like Windex in My Big Fat Greek Wedding in that it cures and helps in all things difficult? Granted, there's still very little we know about the Citadel itself, other than Sam probably has the worst job there. However, it's essentially filled with scholars and doctors, so if there’s one place Jorah could find a cure for his greyscale, it's here.

But since his number one goal is to fight by Daenerys’ side as she tries to take back Westeros, he might end up leaving Oldtown before the actual trained maesters can help him.

Sam could potentially be the one to bust him out of quarantine and possibly travel with him. This would give Jon and Daenerys a link to meet each other, while putting Sam in the right place to tell the right people what he knows about the much-needed dragonglass.

Jorah is at the Citadel to find a cure, but if he and Sam get to talking a bit more, he could very well abandon his plan and rush to Daenerys with the time he has left to warn her about the bigger threat beyond the Wall and get some of that dragonglass to heal himself.