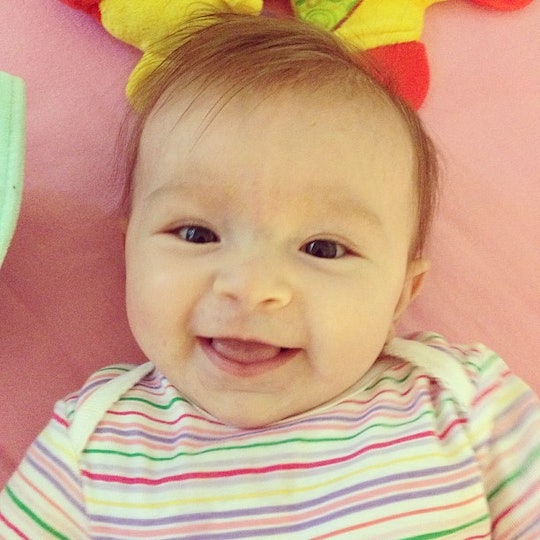 Why Is My Baby Rolling? Don't Worry — It's A Good Thing

Those first few weeks with your newborn can feel pretty anti-climactic when you realize that, while they are the most beautiful thing you've ever seen, they don't do a whole lot. But just when you think your adorable baby is going to be an all-star at acting like a bag of flour with legs, they start getting active. Now, instead of thinking about how all your baby does is sleep, you're yelling things like, "Why is my baby rolling?" as you reposition them from under the couch back to the toy mat.

Trust me, a rolling baby is a milestone you want to hit, but it can also come at you fast. I was so used to laying my daughter down so I could pee, eat a meal, or fold some laundry, and finding her in the same spot 10 minutes later that her rolling really did a number on our routine. Now I had to lay her in the middle of a safe spot, build a security fort around her with pillows (but not too many because then you panic that they'll suffocate), and expect to find her wedged under the couch when I came back from the bathroom.

But why is your baby rolling? Are they training for some kind of tumbling class?

It's pretty simple actually. Your baby is rolling as a way to get mobile, notes Parents. It's their first big milestone on their way to becoming an active tot and usually happens around four months. (But if your baby rolls earlier or later, it's no big deal!)

According to What to Expect, it's a pretty big surprise for both you and your babe when they finally roll over. Often happening during tummy time, the roll happens because of the strength your baby is gaining in their arms, back, and neck. All of that pushing up they've been doing during tummy time has given them the muscles they need to push themselves over.

But give yourself a pat on the back, because while the rolling over may make leaving them alone for a few seconds a bit harder, it's also giving your little one some independence as they head down the road to being totally mobile. Just think of it this way, if your little one is rolling over so they can get to something, that something is probably you. I know, that made pulling them out from under the dining room table totally worth it, didn't it?