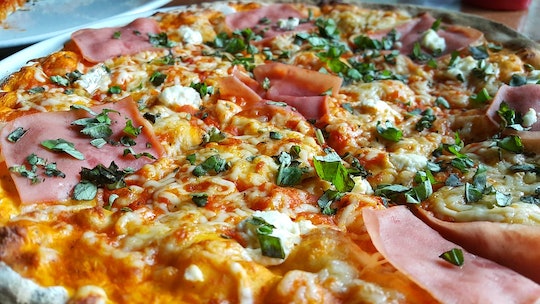 Why Is Pizza Good For Inducing Labor?

A woman who is officially over being pregnant and ready to meet her baby will try a lot of things to naturally induce herself. And, for those who have Dominoes on speef dial, pizza is often said to be the trigger a mama needs to get her baby on the move. I mean, you were probably going to eat pizza anyway, right? But why is pizza good for inducing labor?

For the sake of science, it's time to make one thing clear — no food is guaranteed to make you go into labor. According to What to Expect, unless you're already dilated or in the process of labor, there is no evidence to back up the claim that any food can help jump start labor. Gorging on spicy food or eating a plate of hot wings may not hurt, but it's most likely not going to help. (Castor oil, on the other hand, can be rough and affect your bowels, so proceed with caution.)

But, much like spicy food, pregnant moms have often claimed that pizza was the magic dish that sent them into the delivery room. So what gives? Is there anything that can back up those claims or give them some weight?

Baby Center noted that, while there's never be any hard evidence to prove it, many believe that spices and foods like cumin, garlic, and chilies can induce labor. The theory is that these spices cause contractions as they stimulate the digestive system, but many also believe that the foods increase prostaglandin, a hormone which also helps your body get started with labor.

But there's also been some restaurant "proof" that has kept the idea of pizza as a labor inducer going. In 1981, a Clayton, California restaurant called Skipolini's gained notoriety when a pregnant woman headed for the restaurant and demanded that the manager make her a pizza that would send her into labor. According to the restaurant's website, the final dish weighed over four pounds and included extra onions, extra garlic, and plenty of meat. Apparently, the woman went into labor that very night.

So garlic, right? That seems to be an underlying theme and is definitely part of a pizza recipe, but there's also something else in your favorite dish that could be the cause of inducing labor — oregano. According to the Alliance of African Midwives, oregano, along with basil, can induce labor. Much like spicy food, the theory is that these herbs increase prostaglandins, and they can help ripen the cervix and contract the uterine muscles.

While there's no hard evidence to prove that pizza is good for inducing labor, there are enough theories and speculations to suggest that it may work. And hey? Who could turn down pizza. So eat up, mama. And if the baby doesn't come, just order another pizza. You know, for science.