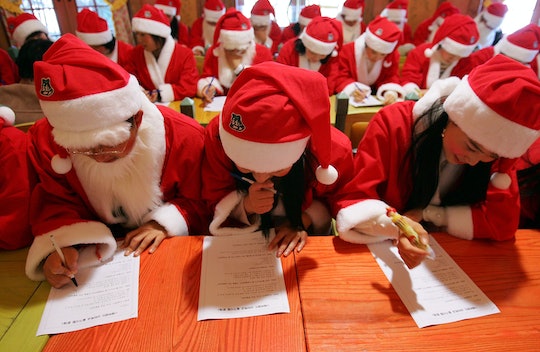 Why Is Sitting On Santa's Lap Such A Contentious Issue? Parents Are Divided

Taking the kids to the mall to see Santa is a holiday tradition for many parents this time of year. They wait in line to let their little ones have a turn sitting on Santa's knee while he asks what they want for Christmas, and maybe they have an overpriced photo taken for posterity. But more and more, parents are questioning whether encouraging their kids to sit with Santa is actually a good idea. Why is sitting on Santa's lap such a contentious issue? To some, it might seem harmless, but to others, it's an issue of body safety and consent.

Even just writing that sentence makes me envision the eye-rolls from those who might think the move to second-guess Santa is yet another example of over-coddling, PC moms and dads who need to loosen up already. And I can definitely understand why something as seemingly innocent as a kid visiting Santa should probably be something we shouldn't need to get our collective guards up about. But there are actually a number of reasons why parents might want to re-think this Christmas rite of passage, and they make a lot of sense.

In recent years, the issue of letting children sit on Santa's lap has been debated as soon as the holidays begin to ramp up — and not just in the United States. In the U.K., for example, the National Association of Head Teachers decided in 2011 that since parents volunteering to play Santa in their children's schools aren't required to pass a background check the way regular volunteers are, children shouldn't be allowed to sit on their laps or be left alone without supervision to err on the side of safety, according to The Telegraph. And in 2014, parents and child abuse advocates in Australia called for updated policies in shopping malls that would require kids to stand beside Santa unless they specifically request otherwise, according to The Daily Mail.

For many of those Australian parents, the news that a 76-year-old man from Adelaide had been charged with multiple counts of sexual assault while working as Santa at a local mall in 2012, according to The Adelaide Advertiser, probably had something to do with why they began to think differently (despite the claims, he was found not guilty in 2014). But as scary as that story sounds, the risk of children being assaulted by Santa isn't usually the reason why many parents have opted out of the tradition.

Because visits with Santa are fun — and because they were likely also something many of us did as kids ourselves and look back on fondly — it might not seem like there could be anything negative about continuing the tradition with your child (other than the fact that it's usually a toss up whether they're going to actually cooperate and smile for the camera). But, as many parents have begun to point out, as much as we might want our kids to go see Santa, a lot of kids actually don't enjoy it. Posting bad photos with Santa featuring our crying, miserable kids has become a parenting past time, and the resulting slew of hilarious photos on our collective Facebook feeds is pretty entertaining. But while Santa might be our beloved childhood Christmas icon, to a lot of little ones, he's just a weird looking stranger in a red suit, after all.

Pushing your kid to sit in Santa's lap when they don't want to — even with honest intentions about memories and a photo they'll appreciate later — really isn't a good idea, according to experts. As Andrew Adesman, M.D., chief of developmental and behavioral pediatrics at the Steven and Alexandra Cohen Children's Medial Center of New York, explained to Parents, "you'll not only likely wind up with a disappointing photo, but pushing the issue can potentially cause some psychological harm to your child." Not only is it stressful and upsetting for a child to be forced to do something that they're afraid of (when it's entirely unnecessary), but Adesman said it also sends "the implicit message that she cannot control with whom she is physically intimate."

And that's a big deal. Although many parents tend to think that teaching children about consent and body autonomy has to do with sex or discussions about private parts, the reality, according to The Washington Post, is that opportunities to reinforce those ideas happen every day — even at the mall at Christmas. By giving children the option to stand instead of sit (or to avoid Santa completely if that's what they want), kids get the message that they are in control of their bodies, and that they have the right to say no to physical contact that makes them feel uncomfortable. That might not seem like a big deal in the context of seeing Santa Claus, but it can definitely be a big deal in a situation where the child is actually at risk, and will benefit from having lots of practice saying no.

As psychotherapist Carol Horton explained to The Washington Post, teaching children "that their body belongs to them,” is an important way to empower them and keep them safe. That means that they don't have to kiss Grandma goodbye when a high five is totally sufficient. If they're being tickled and want it to stop, then the person doing the tickling should do so immediately. And if they don't want to sit on Santa's lap? There's no reason at all why they should.

But even if you intend to be vigilant about physical contact between your child and Santa, and even if your little one seems more than happy to jump right up and tell him all about their Christmas wish list, there might be one other thing to consider before giving Santa's lap the go-ahead. In a 2015 article for SheKnows, writer Lisa Rabasca Roepe shared an eye-opening story about being a young newspaper reporter assigned to write an article about the local mall Santa and his interactions with the kids. Roepe explained that she wasn't a mom at the time, and hadn't really had any reason to think she'd hear anything other than the usual talk about toys and Christmas, but it turned out that a number of the conversations between Santa and the children who came to see him made her uncomfortable:

During one of Santa’s odd exchanges with a 5-year-old girl, Santa suggested to the toddler that perhaps he should bring her makeup and high heel shoes. ... There were other exchanges that day that set off alarm bells in my head but since none of the parents seemed to notice, and I wasn’t a parent myself at the time, I wasn’t sure what to do about it.

Roepe wrote that later, she relayed to her editor that she "thought Santa was a creep," but didn't really understand the significance of that feeling until a few months had passed, and another reporter who'd overheard her conversation told her that "the same guy who played Santa was arrested for child molestation."

Like the Australian man who was accused of assaulting children while dressed as Santa, Roepe's mall Santa was also almost certainly an anomaly. These examples don't necessarily mean that all parents everywhere should become paranoid about taking their kids to see Santa, but it might at least mean that the way we think about the experience could be worth reconsidering. Sure, it's fun and sweet, and we hope that somehow it's allowing us to preserve the magic of Santa and Christmas for our kids. But no child's magical holiday experience will suddenly be ruined by parents who are paying a bit closer attention, or who are OK with not getting the usual photo this time around.

In extreme and only a few circumstances, letting your child sit on Santa's lap could be a safety issue. But most likely it'll just mean one less mall tantrum, and some extra money in your pocket from not shelling out for the holiday snap. Which honestly, sounds pretty win-win to me.