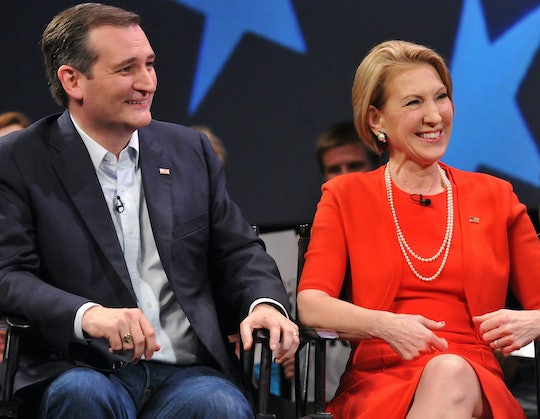 Why Is Ted Cruz Choosing A Running Mate? His Rumored Announcement Seems Premature

Presidential hopeful and Texas Sen. Ted Cruz is set to make an announcement at 4 p.m. on Wednesday, and word on the street is that the senator will name former rival Carly Fiorina as his running mate. But wait, why is Ted Cruz choosing a running mate? Does he... Does he think that he's going to be president or something? Even if Cruz swept every single primary from now until the Republican National Convention in July, he still wouldn't have enough delegates to win the nomination.

The Los Angeles Times noted that candidates typically don't choose a running mate until a few days before the convention at the earliest, and speculated that Cruz may be naming his so early in order to draw attention to his campaign. But what kind of attention is he looking for, exactly? Some might argue that before he starts drawing more attention to himself, a better idea would be to work on his likability first, because nobody in America seems to like Ted Cruz: not his college roommate, not his fellow Republican senators... heck, even his family seems to cringe around him. Is Fiorina supposed to change our minds? I don't see that happening.

If Cruz is seriously considering partnering with a woman who once ate dog food on camera for fun in an attempt to improve his image, he's even more silly than he let on. Her reputation as a businesswoman is less than stellar, and he's unrepentantly transphobic. Put the two of them together, and the end result is — oh, how it pains me to type this — worse than Donald Trump. At least Trump has actually had some success (although he's had plenty of failures, too), and he's moderately OK with trans people using the bathroom that corresponds with their gender (although it's probably purely for economic reasons).

So who is Cruz trying to court with this stunt? There's no way he's stealing any votes from Vermont Sen. Bernie Sanders or former Secretary of State Hillary Clinton. Ohio Gov. John Kasich only has about 12 people voting for him, so that's pointless. And Trump currently has 50 percent of the Republican vote. Who doesn't like Trump, but might go for an even-worse person who simply has a better grasp on his inside voice? Could it be Republican women, whose hatred of Trump is growing in numbers? Trump's accused Clinton of playing the "woman card" for weeks; could that be exactly what Cruz is doing? Making hateful politics more palatable to dames by having a real, live one cosign them? I cannot wait to see Trump's reaction to this.