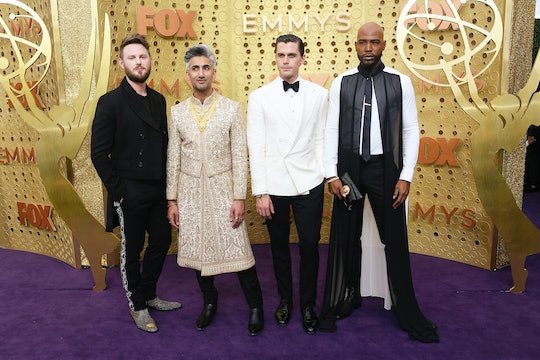 Why Oh Why Is The Emmys Red Carpet Purple This Year?

Sunday night was all about the Emmy Awards, and even more so it was all about the traditional red carpet appearances beforehand. Because let's be honest, as much as we're all dying to know who wins the awards, we're probably slightly more interested in seeing who is wearing what. But this year there was an added element of mystery and people were definitely wondering why the Emmys red carpet was purple because it definitely changed things up.

If you've ever watched the Emmys, you know all about the red carpet portion of the show. It's usually a time for the stars to show off their gorgeous outfits and talk about their presence at the Emmy Awards, either as presenters, nominees, or just guests who get to hang out. The stars are generally the main event, but in 2019 the stars were sort of eclipsed by a big mystery at Los Angeles’ Microsoft Theater on Sunday. Because the red carpet was actually purple this time around, and there didn't appear to be any clear explanation as to why. Which was a bit distracting for those of us who just wanted to focus on Angela Bassett's amazing red jumpsuit and all the gossip and such.

In an effort to get to the bottom of the mystery, Romper reached out for comment to the host of the 71st Emmys, the Fox Network. And while Romper's request for comment from Fox was not immediately returned, Rita Garcia, a reporter from Good Day LA, shared in a video on Twitter that she spoke with the Television Academy about the purple carpet. And it seems we all need to give her an awful lot of credit because Garcia might have cracked the case.

"What do you think of when you think of purple? It's royalty," Garcia reported of the carpet color change. "So this year they're honoring Hollywood and also television royalty, so that's what this is all about."

So there you have it, it sounds like the Television Academy wants to honor Hollywood royalty at the Emmys, which certainly makes sense because the past few years have seen a bit of a royalty/television crossover, haven't they?

Of course, I'm talking about former Suits actress Meghan Markle who is now Duchess of Sussex. Not that the purple carpet has been directly connected to her, obviously, I'm just saying that acting can sometimes lead to being a royal person and now there's the purple carpet at the Emmys and this does not feel like a coincidence. Nor does the beautiful purple hair of Fox pre-show Emmy host Kelly Osbourne, who rocked the look while interviewing celebrities on the purple carpet. It really felt like a cohesive royal moment. Also, Game of Thrones is up for a whopping 10 Emmys and is all about winning the throne of Westeros... so come on now. It's all coming together.

While Fox has not actually confirmed that the purple carpet was based on wanting a ~*royal*~ feel for the 71st Emmy Awards, they certainly got people talking about it.