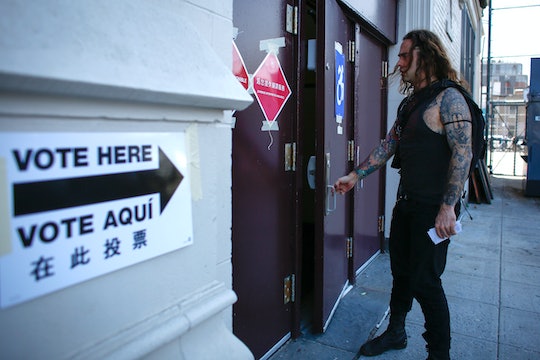 Why Is The New York Primary Important? It Could Be A Last-Minute Game Changer

Every election is important. Every voter's voice is important. And every state's primary (or caucus) is important. Period. However, this year, the Empire State finds itself in a unique position: for the first time in nearly four decades, New York may play a crucial role in determining who receives the parties' presidential nomination. But why is the New York primary so important, and what makes this year's election different from years past?

Five words: There is no clear "winner" — at least not yet.

Make no mistake, former Secretary of State — and former New York Sen. — Hillary Clinton and billionaire Donald Trump are expected to win New York, but neither has "cleaned up," and neither Clinton nor Trump have a clear, unchallengeable lead. As such, late-voting states — like New York — now find themselves, and their delegates, more important than ever.

And New York has a lot of delegates. In fact, on the Democratic side of things, there are 247 delegates up for grabs, and on the Republican side there are 95. And those delegates matter.

Why? Because it is "late in the game." Because Trump needs 1,237 delegates to clinch the Republican nomination — and currently only has 756, according to Politico. Because the GOP and Trump don't see eye-to-eye, and a trip to the Republican National Convention could spell disaster for the party's front-runner. And New York is important for Democrats because Clinton has 1,758 of the 2,383 she needs to become the 2016 Democratic presidential nominee, and Sanders has won eight of the last nine Democratic primaries, according to CNN. Also, this year's election is highly-contested and intense.

What's more, three of the five candidates have immediate ties with the Empire State. Vermont Sen. Bernie Sanders was born and raised in Brooklyn. Trump is from Queens — and his name has appeared on more buildings and real estate projects in New York than I can count — and, as mentioned, Clinton is a former,\ two-term Sen. from New York. (Her campaign headquarters are also located in Brooklyn, and she and her husband, former President Bill Clinton, own a home in Chappaqua.)

(Confused yet? Don't worry; you are not alone.)

Regardless of how New York's election plays out, there is one fact no one can dispute: each remaining delegate now has more power and weight than ever before.