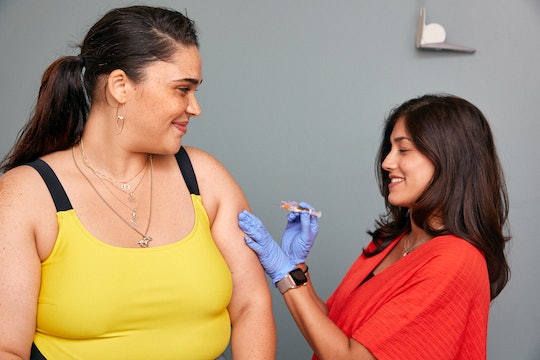 Here's Why You *Really* Want To Get The Whooping Cough Vaccine

When I was pregnant for the first time, I remember my OB-GYN being extremely persistent in ensuring that I received a vaccine to protect against pertussis, or whooping cough, as it is more commonly known. I wasn't sure why the whooping cough vaccine is important, but she also insisted that I make my family do the same in order to help protect my baby from contracting the infection. While she was absolutely convincing enough to make me and my family members get the vaccine, I still found myself wondering what all the fuss was about.

To put it simply: it can be a matter of life and death. "Whooping cough, or '100 day cough' is a bacterial infection that can kill young children," Dr. Natasha Burgert, a pediatrician practicing in Kansas City tells Romper, referring to the infection by the moniker that refers to how long the complications can linger.

As it turns out, the complications from whooping cough can be extremely dangerous for babies under 1 year of age, which is why my doctor (and many others) press the issue of preventative vaccines with pregnant women and parents of newborns. About half of babies who contract pertussis before age 1 need to be hospitalized, according to the Centers For Disease Control and Prevention (CDC). Of the babies who are hospitalized due to the disease, 1 in 100 will die, the CDC reported. While the statistics are absolutely harrowing and probably difficult to read, it is absolutely vital to understand the grave dangers of this disease.

The hallmark symptom of pertussis includes a hacking cough with a noisy intake of breath that follows that sounds like "whoop," according to the Mayo Clinic. Other symptoms include runny nose, fever, nasal congestion, and red watery eyes. Approximately seven to 10 days after becoming infected, a person will begin to show mild symptoms, with symptoms intensifying at the two-week mark when coughing fits can provoke vomiting and cause extreme fatigue, the Mayo Clinic reported.

Although teens and adults typically recover from whooping cough with few, if any, complications, the complications for babies can include pneumonia, slowed or stopped breathing, dehydration, seizures, and brain damage, according to the Mayo Clinic.

"Pertussis is circulating in communities all over the country. Common sense precautions apply. We don’t want unprotected infants around those who are sick with fever and respiratory symptoms," Burgert tells Romper.

Burgert tells Romper, "All pregnant moms should get the whooping cough vaccine with every pregnancy." Because the first dose of the DTap vaccine is not given to babies until 2 months of age, doctors typically recommend family members who will be around infants receive a Tdap vaccine to protect them from the disease as well. The hope here is that by protecting those closest to the baby, the baby will also be protected.

However, the risk of a baby contracting whooping cough from the general public still exists, which is why it is imperative for parents to take precautions, such as ensuring sick individuals do not touch or hold their infants, as well as keeping them in a carrier when taking young babies out in public. Proper hand washing and hygiene is another key aspect of keeping families protected, according to WebMD. "In addition, consider child care facilities that require vaccines for their staff and other children," Burgert tells Romper.