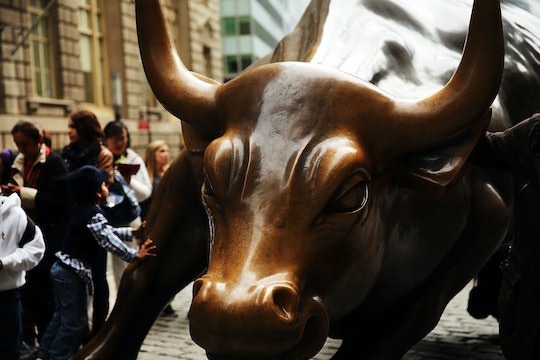 This New Wall Street Statue Is So Important

A new bronze statue cropped up in Lower East Manhattan on the eve of International Women's Day. Several artists worked on erecting the statue in the dark of night so that it would be ready for viewing by street traffic on Tuesday morning. The statue is a fearless girl facing down Wall Street's famous charging bull, and the statement is intended to be a powerful one, according to The Huffington Post.

The bronze statue of a young girl staring directly into the eyes of the charging bull was commissioned by State Street Global Advisers not only to honor International Women's Day, but as a call to action for some 3,500 companies in which State Street invests on behalf of its clients to "take intentional steps to increase the number of women on their corporate boards," according to a press release by CEO and president Ron O'Hanley.

State Street Global Advisers is the third largest asset manager in the world; It deals with 2.5 trillion dollars worth of assets. And as SSGA looks towards the future, it wants to see greater gender diversity in the heavily male driven boardrooms of Wall Street:

We believe good corporate governance is a function of strong, effective and independent board leadership. A key contributor to effective independent board leadership is diversity of thought, which requires directors with different skills, backgrounds and expertise. Today, we are calling on companies to take concrete steps to increase gender diversity on their boards and have issued clear guidance to help them begin to take action.

According to research carried out by Catalyst, women account for less than 15 percent of board seats in over 3,000 companies. That number is actually up 54 percent from 2010.

Sculptor Kristen Visbal created the bronze sculpture. She told The Wall Street Journal that the inspiration behind the girl was a combination of a 9-year-old Latina girl and the daughter of a friend. She initially intended to have the girl charging back against the bull, but decided it would be more effective to have the girl standing strong. As she told The Journal:

Wall Street is a traditionally male environment and it says, "Hey, we’re here." To me, it says a woman can be delicate and petite, but strong.

The statue of the "fearless girl" is only scheduled to stay for a month, but SSGA it hoping that, like the original charging bull before it, people will want her to stick around. According to The Huffington Post, when the charging bull statue was created by artist Arturo Di Modica in 1989, it was erected illegally in the middle of the night as a symbol of strength after the stock market crash of 1987. And yet, it stayed.

This new symbol of a different kind of strength, the fearlessness of a young girl in the face of overwhelming odds, will most certainly strike a chord as well — especially with women and girls everywhere facing a future that often looks very much like the past. And yet... there they are. Persisting. And resisting.