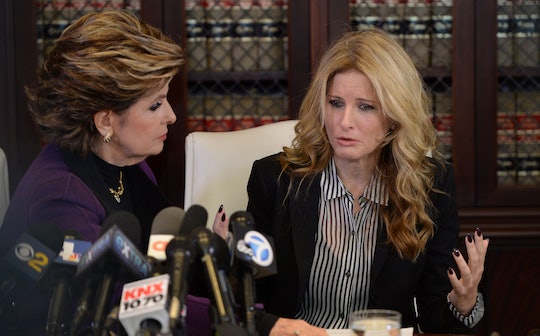 Trump Is Being Sued By A Former Accuser

President-elect Trump is a busy guy these days, what with his upcoming inauguration on Friday and his most recent Twitter battle with Alec Baldwin. And it looks like the hits are just going to keep on coming, especially now that a former Apprentice contestant has yet another serious bone to pick with him. On Tuesday, Trump learned he was being sued by a former accuser who is claiming defamation — and knowing Trump, who is already inundated with a wave of other troubling developments, he probably isn't too happy about it.

Romper has reached out to the Trump transition team for comment and is awaiting a response.

Summer Zervos, a contestant from Season 5 of The Apprentice, was one of several women who accused Trump of alleged "unwanted sexual touching" during the 2016 presidential election. The accusations began to surface in the wake of the release of an Access Hollywood tape recording, when Trump could be heard bragging about groping and kissing women without their consent. Civil rights lawyer Gloria Allred, who is representing Zervos, held a press conference on Tuesday morning to announce that Zervos is suing Trump for defamation; After the accusations of sexual misconduct were made public, Allred maintains that Trump “knowingly, intentionally, and maliciously threw each of these women under the bus."

Allred, who also represents several other women who have accused Trump of allegedly inappropriate behavior, has called on the president-elect to either own up to his wrongdoing, or afford these women their day in court to confront their aggressor.

Zervos has alleged that Trump groped her, and attempted to have sex with her during a job interview after her stint on The Apprentice. Trump has gone on record several times saying that each and every one of his accusers are liars, vowing to sue each and every woman who dared to accuse him of sexual assault.

At her press conference on Tuesday, Zervos released the following statement regarding the defamation suit against Trump:

Today I filed a lawsuit against Donald Trump for defamation. On Nov. 11, 2016, I called on Mr. Trump to retract his statements against me calling me a liar. I also called upon him to state that what I said about his behavior towards me was true. More than two months have gone by and he has not issued that retraction.

Despite the time that has passed Zervos said she would still be willing to dismiss her case, on one condition:

I want Mr. Trump to know that I will still be willing to dismiss my case against him immediately, for no monetary compensation, if he would simply retract his false and defamatory statements about me and admit that I told the truth about him.

Allred was not quite as amenable. She has called Trump a "fourth-rate politician and a fifth-rate human being", and said that she would not back down from a potentially difficult fight with the incoming president. She had this message to share with Trump:

Please understand that you will not intimidate me. Others who are smarter, richer and more famous than you have tried and failed.