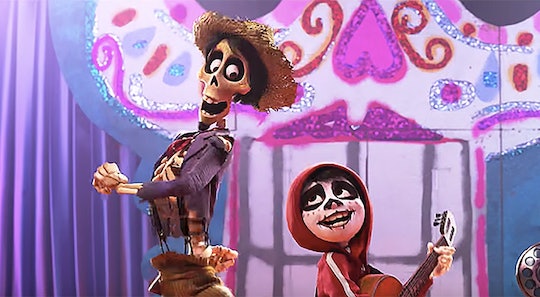 'Coco' Will Join Disney+ Just In Time For The Holidays

When Disney+ launched on Nov. 12, some subscribers quickly noticed a few movies and TV shows are missing from the streaming service's catalog, including the 2017 hit, Coco. And if you're wondering why Coco isn't on Disney+ yet, rest assured it will be able for viewing by month's end.

It's a heartwarming, emotional, and downright beautiful tale, so it's understandable many people are upset to see Coco missing from Disney+'s library, like this subscriber who tweeted, "Wait. So Coco isn’t on Disney Plus?"

Yep, it's true. Coco won't be available for streaming until Nov. 29, when it leaves Netflix for the new app. The movie first joined Netflix in May 2018, as apart of Disney's deal with the popular streaming service.

In addition to Coco, other Disney/Pixar animated films will soon hit Disney+, including The Incredibles (July 2020), and Ralph Breaks the Internet (December 2020). Until then, you can steam the aforementioned titles on Netflix. And if you find yourself still craving Pixar, you can watch all "Toy Story movies, all three Cars films, both Finding Nemo and Finding Dory, Frozen, and Inside Out" on Disney+, as CNET noted.

Other highly anticipated movies unrelated to Pixar include some live-action remakes, like The Jungle Book (May 2021) and Beauty and the Beast (October 2020).

All this waiting might be frustrating for fans who've already subscribed to Disney+, but it will be worth it in the end. And best of all, Coco's premiere on the app is only nine days away.