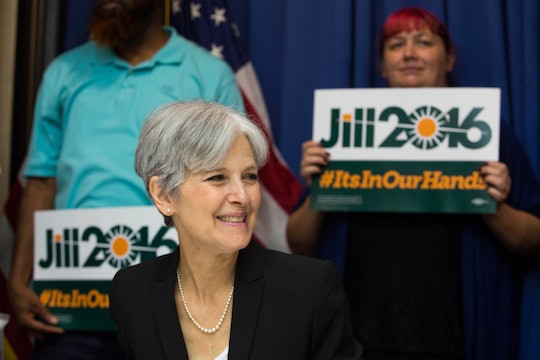 Why Isn't Jill Stein At The First Presidential Debate? She Didn't Quite Make The Cut

On Monday night, Republican and Democratic Party presidential candidates, Donald Trump and Hillary Clinton, will take the stage at Hofstra University for the first 2016 presidential debate. They will likely attempt to appeal to voters with their campaign platforms and have a few arguments. But there will be candidates from two political parties missing from that stage — Jill Stein of the Green Party and Gary Johnson of the Libertarian Party. This absence, specifically that of the former, might lead people to wonder why Stein isn't at the first presidential debate, battling it out with the two main party candidates — especially during an election where third party candidates have seemed more appealing than ever.

First, candidates must be constitutionally eligible; They must also appear on a sufficient number of state ballots and be polling an average of at least 15 percent by five different polling organizations. At the time the first debate participants were announced, Stein was only polling an average of 3.2 percent nationally, according to CNN.

Sadly, due to her low polling numbers, Stein will not be at the first debate. This is truly unfortunate for undecided voters in the 2016 election who might find Stein's presidential platform — which includes plans to protect the environment and end poverty — more appealing than Clinton or Trump's presidential platforms. But just because Stein will not be attending this first debate does not mean that she has given up hope.

Stein supporters are rallying for Stein to make an official appearance at the next two debates by different measures. There is currently a petition with 112,000 signatures to get the CPD to allow Stein to debate Trump and Clinton. Furthermore, Stein supporters are calling for volunteers to stage a protest outside of the first debate, according to The Guardian, and partake in civil disobedience (volunteers will reportedly try to escort the candidates into the first debate).

"We will be at the debate to insist that Americans not only have a right to vote, but we have a right to know who we can vote for," Stein told CNN. According to CNN, the CPD will review the criteria for the second and third debates in the future — meaning if Stein's polling numbers due rise, there is a chance she could be on the debate stage during the next two debates on October.

It is truly unfortunate when all candidates — who appeal to different types of voters — can't get their voices heard. But rules are rules.