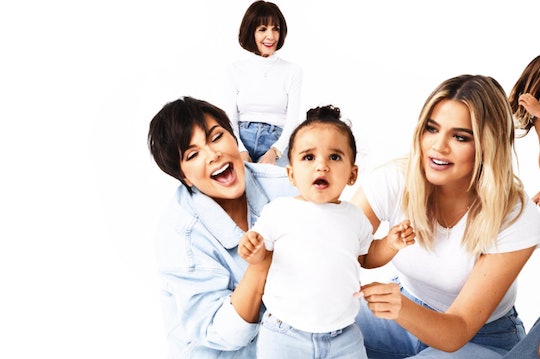 Earlier this week, I was all but convinced that Khloé Kardashian wasn't actually pregnant, since her appearances in the Christmas card didn't show any noticeable sign of a bump at all. Or any indication that she was going to be welcoming a new baby into the fam. When she confirmed her pregnancy Wednesday with a bump pic, my brain exploded. So why isn't Khloé Kardashian pregnant in the Christmas card? The answer is actually pretty simple.

The Kardashian family does everything in a different order than the rest of us. Really. Although the premise of their show is "reality" television, for example, they often film scenes way after things we read about in the news happen. It's not just a function of when they film and when they air the episodes, either.

Sometimes they'll be filming while an event in their lives happens, but they won't film a scene in which they talk about that scandal or whatever until months later. That happened this season, for example, with the episodes of their Santa Barbara trip.

It's also the reason fans didn't get a scene in which the pregnancies are announced to the family before the mid-season finale — maybe they just weren't ready yet. They also filmed their Christmas special all the way back in October, so they could have done the Christmas card shoot around then, too, which would best explain why Khloé doesn't have a bump yet in the pics.

Though they could have done it even earlier! According to the rumors, Khloé was about four months along in September, so if she knew that she was going to be pregnant for the shoot, she could have moved it up, especially if she wasn't sure she was ready to be photographed while pregnant yet.

Then again, I think they shot it in November. It was then that Kim told the Late Late Show that the shoot, which is called the "25 Days of Christmas" and shot by photographer Eli Russell Linnetz, was "really casual" and just "women and children." She said, "It's shot really casually. We’re kind of doing jeans and T-shirts vibe. Really cute. All the kids and so hard to put together. It’s women and children this year."

It's not just women and children, though, since Kanye West is in there. Which either means Kim made an exception for the one father who's also married into the family or that maybe she didn't see the final proofs until November. Also, Kourtney posted a bathroom selfie on Nov. 10 that definitely looks like she's wearing the same jeans, crop top, and hair and makeup vibes as the photo shoot. Then again, it's jeans and a T-shirt, this could literally be any day.

These Are The Khloé Shots So Far For The Card

In all of the shots, the angles and baby Dream can also conceal any extra baby weight. This is the Kardashian family, after all, they know how to photograph themselves. Also, it's sort of cheap to just assume that Khloé has to have a huge baby bump for her entire pregnancy. Khloé's pregnancy reveal picture features a growing bump, so it makes sense that in the Christmas card pics she doesn't "look pregnant," whatever that really means.

Women all show differently, too, so it's not up to anyone to judge her body as it develops. We don't know how far along she is — there was only a rumor that she was a few months along in September and that could have been when she found out (also a good reason for their not being a pregnancy reveal in the first half of the season).

In any case, she looks amazing in her pregnancy reveal and this year's Christmas card. Good for her!