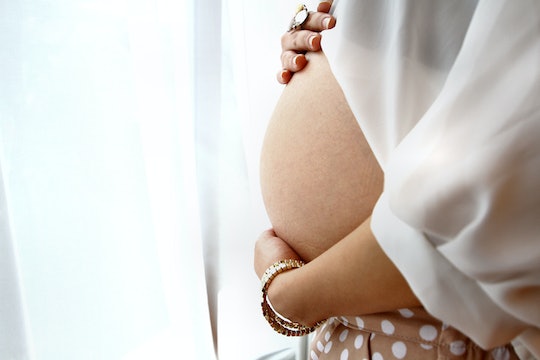 Why Isn't My Baby Dropping? The Experts Weigh In

It's pretty standard when you become a mother to learn a few lessons, like "don't drop the baby." But when you're preparing to give birth, that's all you want to happen. When your baby "drops," it's often a signal that your baby is engaging in your pelvis to prepare for labor. But if you're freaking out and wondering why your baby isn't dropping, well, I hear you. My baby remained high even at 39 weeks, where I ended up having a C-section thanks to my preeclampsia diagnosis. But I was constantly worried that because my baby hadn't dropped, there was something wrong and that she wasn't going to make it out unless there was an intervention.

I spoke with Dr. Kecia Gaither, maternal fetal medicine specialist and perinatal consultant in the Carolinas HealthCare System to find out if my fears, like many others, were valid. "By the conclusion of the third trimester of pregnancy, the fetus settles or 'drops' into the mother’s pelvis in preparation for birth; this occurrence is known as 'dropping' or lightening," Gaither says. "But a baby may not drop or engage into the mother's pelvis if it's large, or if it's not in a head first position. Rather, it is laying sideways across the mother's abdomen, in breech, or a 'rump first' position."

So if you're feeling nervous that your baby hasn't dropped, your baby might just be in the wrong position. While you won't be able to tell if your baby is too big until labor starts, Baby Center notes that the force of your pushes and contractions may be just what your baby needs to get engaged.

Gaither also notes that just because you haven't noticed that your baby bump is lower doesn't mean the babe hasn't dropped. "Many women can tell when the baby's head engages into the pelvis by feeling extra pressure in the pelvis or rectum, having to urinate more frequently, experiencing a decrease in heartburn after eating or a decrease in feeling short of breath," she says. Finally, now that your baby's lower, your organs can all get back into place!

If you're still concerned that a high baby bump means you're going to be pregnant forever, don't. "Dropping or engaging into the mother’s pelvis has no relation to going past due dates," Gaither says. All it means when your baby hasn't dropped is that they either might be too big for your pelvis or simply in the wrong position.

As always, if you're concerned at all about your pregnancy, speak with your doctor. But Gaither recommends a few tips that might (keyword: might) help your baby get in position. "While dropping is a natural intrinsic process, there are some modalities which may facilitate the process such as engaging in light, non-strenuous exercises which loosen the pelvic muscles such as squats, lunges, walking, or rocking on an exercise ball, as well as chiropractic adjustments," Gaither suggests. Just be sure to get your doctor's permission before trying anything new.

So don't fret too much. Just because your baby isn't dropping doesn't mean anything's wrong. You still have time for your little one to get engaged and ready to meet you.