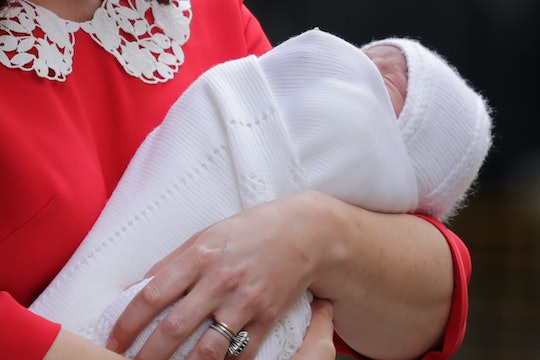 The Duke and Duchess of Cambridge have finally announced their third child's name and, of course, it's beautiful, classic, and seeped with tradition: Louis Arthur Charles. But as usual with royal baby names, us commoners are often confused by the title. Is this it? Why isn't Prince Louis' last name Mountbatten-Windsor? While that would be his *official* surname if he was just an average kid, it turns out that anyone with a title like His or Her Royal Highness doesn't have to use a surname at all.

If you've watched any of The Crown, you already know that when it comes to last names, there's been quite some fuss in the royal family. After Queen Elizabeth became queen, she changed her children's last names from Mountbatten, her husband Prince Philip's last name, back to Windsor, her own last name so that the royal line could continue to be the House of Windsor. But according to Express, in 1960, Queen Elizabeth went to visit then-Prime Minister Howard Macmillan to discuss future surnames for their family's descendants, as Prince Philip was still pretty upset. That year, the queen made an announcement that while the royal family would still be the House of Windsor, any descendants without the "style of HRH," which is His or Her Royal Highness, or any descendants that weren't princes or princesses, would "bear the surname Mountbatten-Windsor."

According to the royal family website, unless Prince Charles changes any of this when he becomes king, he will continue the House of Windsor and his descendants will continue on as Mountbatten-Windsor.

And Prince Louis? He's definitely holding that royal title, along with being formally known as His Royal Highness Prince Louis Arthur Charles. While it makes sense that none of the royal family would actually use a surname, there are some instances where they need to have one. Bazaar reported that when Prince William and Prince Harry joined the army, they both gave themselves the last name of Wales because their father, Prince Charles, is the Prince of Wales. Likewise, when Prince George started preschool, he became formally known in his school as George Cambridge as his father is the Duke of Cambridge.

But it's not just the missing surname that's traditional about Prince Louis' moniker — his name also has a ton of meaning. The Telegraph noted that both Prince William and Prince George have Louis as middle names (experts weren't expecting a third Louis to be used), and Charles is obviously in reference to his grandfather, Prince Charles. But where does Louis come in?

Prince Louis' first name most likely comes from Louis Mountbatten, Prince Philip's mentor and uncle, who was a British royal navy officer, reported The Sun. In 1979, at the age of 70, Mountbatten was killed when the IRA planted a bomb on his boat.

It's highly unlikely you'll ever hear Prince Louis referred to as Louis Arthur Charles Mountbatten-Windsor (wow, that's a mouthful), but it technically would be his full name if he wasn't also a prince and formally known as His Royal Highness. Chances are that when he goes to school or has future endeavors with a last name like his family, he'll choose Cambridge as his surname like his brother. But until then, we'll just get to talk about Prince Louis and his classic, adorable moniker. Being named after some great men in your family's history seems like an OK way to start life as a baby boy to me.