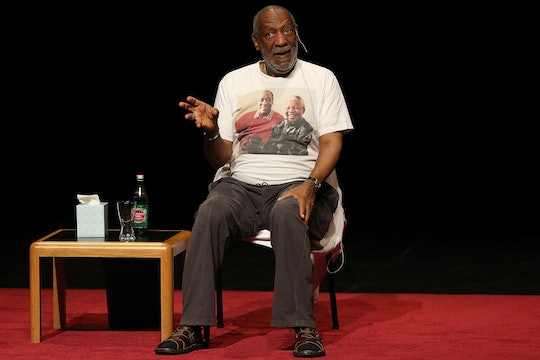 On Wednesday morning, Bill Cosby was charged with aggravated indecent assault. Former Temple University employee Andrea Constand alleges that Cosby drugged and sexually assaulted her at his Elkins Park, Pennsylvania, home in 2004. Twitter has reacted predictably — there are those that are happy Cosby will finally have to answer to at least one of the more than 50 women who have accused him of assault, and there are others who are sympathetic, insisting that Cosby is innocent, innocent until proven guilty, or (here's a weird one) "too old" to be charged for his alleged crimes. Then there are the people who joke about Cosby's charges and about rape, generally. But, even if Cosby is guilty, it's still never OK to turn rape into a joke.

Whenever a man is sent to jail for rape (something that sadly happens much less often than it should), the jokes are never far behind: references to dropping the soap in the shower, people gleefully speculating on whether or not the tables will be turned and he'll "get what's coming to him." While it's somewhat normal that people just to want to see someone punished for their crimes, prison rape is not how society justly punishes someone for a wrongdoing. Prison rape is still rape, and, even if the victim has committed rape him or herself, it doesn't mean that they deserve it.

When people joke about prison rape, it minimizes all rape. If someone make the case that Cosby deserves to be raped, should he be guilty, then people can try to justify other rapes. Who else deserves rape? Someone who took naked pictures of herself? Someone who robbed a convenience store? What about a woman who got drunk and wandered down a dark alley in a miniskirt? It's a slippery slope. If people think that joking about Cosby being raped is an OK action, then those people will likely also think they're fit to judge who should and shouldn't be raped, generally.

Even if people are "just kidding," and they don't really want Cosby to be raped, joking about it still sets the precedent that it's acceptable to joke about rape. Next come the jokes about innocent men or women who were raped. And that leads to people taking rape less seriously overall. Once it's not taken seriously, it's more likely to happen, less likely to be reported, and less likely to be punished.

If Cosby is, indeed, guilty, I want to see him punished. And, to some extent, human nature makes me hope that he receives punishment that equals the pain his alleged victim felt. But this is 2015, and "an eye for an eye" doesn't fly with me. Being stripped of all his honorary degrees, losing all of his fans, and spending the last few years of his life in prison — if a court deems it justice — is justice.

Joking about the possibility that he could be raped in prison normalizes prison rape, but it also continues to tell people that there are those who deserve rape and those who do not. But the truth is that no one deserves to be raped — ever. Joking about that fact will only continue to hurt survivors and slow society's progress in deeming rape a violent crime that is never justifiable.