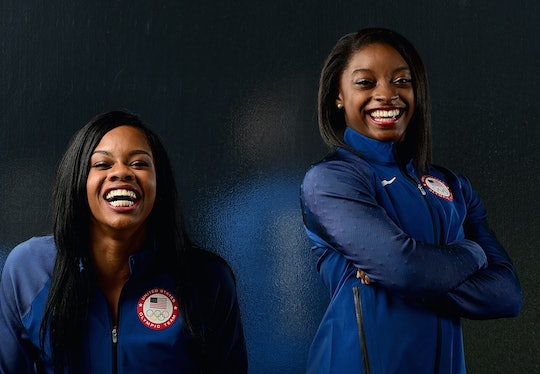 Why It's So Important For Me To See 2 Black Women Representing The U.S. At The Olympics

When I was 8 years old, I was obsessed with gymnastics. I thought it was one of the most magical, beautiful sports, right after ice skating. The 1996 Summer Olympics took place that year in Atlanta, and the women's Olympic team (now known as the Magnificent Seven) dominated that year. And while I was excited about all of them, I was the most excited about Dominique Dawes. So rarely did I see black girls that looked like me on TV, especially in sports, performing at level as high as The Olympics, and I was blown away by her movements, her abilities, her greatness, her power. I was so proud that she went to The Olympics three times. Because of her, I felt like it was possible for me to also accomplish great things in sports. And 20 years later, I'm just as excited to see Gabby Douglas and Simone Biles are representing the U.S. in The Olympics in Rio.

More Like This
Vaccinated People Can Ditch Masks. Where Does That Leave Kids?
Is The Tooth Fairy Real?
Apple Card Family: How It Works & What Your Kids Can Learn
Attorneys General In Nearly Every State Oppose Facebook’s “Instagram For Kids” Plan

After watching Dominique Dawes and the Magnificent Seven in '96, I tried ice skating, gymnastics, ballet, and soccer — all of this while swimming, too. Eventually, I realized that I was a swimmer and that was I was good at it. So for the next 10 years of my life, I devoted myself to swimming. I attended two-a-day practices with long runs in between. I was always at the gym. I ate, slept, and breathed swimming. All while remembering Dominique Dawes, and what she meant to me as a black woman competing in The Olympics, as a black woman representing the United States of America.

So many little girls and women like me can look at this team and not only see that things are possible, but that excellence is not limited to the white experience.

I eventually tore my rotator cuff training for a big meet that would've lead to Olympic trials, and while I was bitter and angry, I eventually settled on being grateful that I'd even came as far as I had, that I'd accomplished what I had. I don't watch The Olympics as much as I did as a teenager — it was so much more real for me then — but I do try to keep track of the Games though, of who's going, and how people are doing. And this year I've been especially excited about the upcoming games in Rio because of Simone Biles. Videos of Simone Biles have been popping up on my Facebook for about a year now. At first I kind of ignored them, but then I couldn't. I was in disbelief at her strength and power. I was also cheering her on because she is a black woman doing extraordinary things, during a period in America where black people are fighting to be seen and heard and to stay alive. When they announced the Olympic team this year, I was jumping up and down. Not only did Simone Biles make it, but so did Gabby Douglas and Laurie Hernandez. All women of color. I'm not sure I can recall the U.S. gymnastics team ever being this diverse.

I know the women's Olympic team is favored to win, and even though I'm psyched about that, I'm more excited to see these girls walk out together and to watch my daughter's eyes light up when she sees people who look like her standing there, competing for the highest honor.

I'm always talking about the power of representation. And this year's Olympic gymnastics teams is all about power. So many little girls and women like me can look at this team and not only see that things are possible, but that excellence is not limited to the white experience. Seeing these young women standing together is a beautiful reminder of what America can be when it wants to. The team selected to represent the United States in Rio at The Olympics is an actual reflection of the people living here. And it's beautiful to see that America is finally being represented in its true form.

I am counting down to The Olympics. I know the women's Olympic team is favored to win, and even though I'm psyched about that, I'm more excited to see these girls walk out together and to watch my daughter's eyes light up when she sees people who look like her standing there, competing for the highest honor. Too often we fall on the side of, "but children don't see color," when they absolutely do. And seeing color in America is important — more so now than maybe ever before. Especially when they are a person of color. I mean, how could children not see color when they are, like my daughter, so many different beautiful shades?

I'm ready for Gabby Douglas, Simone Biles, and Laurie Hernandez to inspire a new generation of girls and women. In the same way that I was inspired when I first saw Dominique Dawes perform a floor exercise, we need the same for our daughters and nieces and sisters. They need to see people who look like they do doing great things. We need the reminders and examples that show us — show them — that greatness is possible, no matter their skin tone.