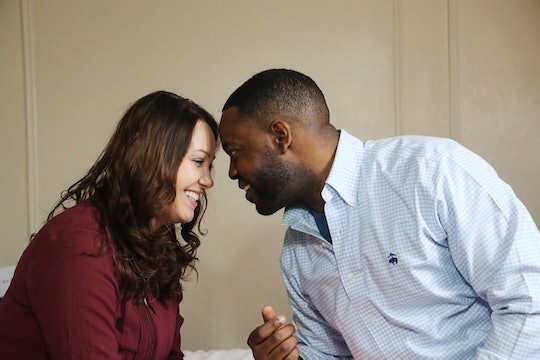 Actually, I'm Glad We Fight In Front Of The Kids

Growing up, I can only recall very few moments where my parents fought in front of the kids (my three siblings and me), which only lead me to assume that they either did it behind closed doors or didn’t do it at all. Yes, there were times when my parents fought in front of us, but it mostly boiled down to disagreements stemming from the way one parent had handled or not handled a punishment. They never fought about anything relationship- or life-threatening, so I just always shrugged their parenting disagreements off as non-existent.

Fast forward years later to my own life and my own marriage, and the example laid before me by my non-fighting parents made me think happy couples just didn’t fight. Oh, how wrong I was. I laugh now thinking about how naive I was back then. I'd watched my parents' behaviors and their marriage and partnership my whole life and was basically conditioned to apply what I learned from them to my new marriage. But like any young newlywed, I quickly found out that the exact opposite was true. My husband and I fought over silly things, like the volume being up too loud while watching a movie, money, and of course, sex. We'd fight. Then we'd make up. Of course, we learned to love each other more with each passing year, and we learned no fight was worth risking our marriage over, but that realization came through experience, not overnight.

I struggled in those early years of marriage, thinking that there was something wrong with us for fighting here and there. I'd ask myself if other couples fought as much as we did, or if it was even normal how often we argued. Even though we were finding our way just like any other couple, I couldn't shake the feeling that fighting meant we were doing something wrong, and it was hard to undo that feeling. Looking back, I actually wish my parents had fought in front of us growing up every once in awhile because at this then I'd have their example to draw on. I wished I knew how normal fighting was when my husband and I first got married.

By the time our son was old enough to understand what was going on when my husband and I disagreed, we made the decision to keep our fights "public" when inside our home. Why? Because we both felt that doing so gave him the opportunity to see firsthand how we came to a resolution together. And whenever a resolution didn't immediately come, he watched us kiss each other and agree to disagree because our love was (and is) stronger than any fight.

My son doesn’t ever refer to them as fights, but as “conversations.” He developed this term completely on his own, but I can’t help but absolutely love it. Mommy and daddy disagree about something so they have a conversation to resolve those differences. It’s as simple as that.

The decision to fight in front of our son felt like a no brainer to us. We both want our kids to grow up to be strong individuals who understand that there will be disagreements along the way, even with someone you love, because it's just a fact of life. So we made a conscious effort to not avoid a fight if our son was there, instead letting it happen so that he could see how to exercise effective problem-solving skills.

I can’t recall the exact moment we had our first fight in front of him, but I can tell you that my son doesn’t ever refer to them as fights, but as “conversations.” He developed this term completely on his own, but I can’t help but absolutely love it. Mommy and daddy disagree about something so they have a conversation to resolve those differences. It’s as simple as that.

It's so gratifying to hear him say this, especially because I didn't have that example myself. Relationships are hard, and I'd hate for my son, and now my daughter, to want to walk away from one someday solely because they didn't know how to communicate during an argument. Honestly, I think it's one of the most important like skills I can instill in him, and it's amazing to see that even at 8 years old, he's already picked up so much about what makes a relationship successful.

Looking at these more-heated moments, I can wholeheartedly say that if our son is there with us it keeps us from saying anything super hurtful to one another. We fight to fix the issue, not to wound with words or insults. As a parent, I can't think of anything more I'd want to model for my children.

And when things get heated, because let’s be honest, sometimes they do, my husband and I stand our ground and allow him witness what's going on because he can always learn from the experience. Looking at these more-heated moments, I can wholeheartedly say that if our son is there with us it keeps us from saying anything super hurtful to one another. We fight to fix the issue, not to wound with words or insults. As a parent, I can't think of anything more I'd want to model for my children. I take ownership as a parent to set an example for our kids of what a healthy, happy relationship looks like. They'll take the lessons they learn from my husband and me and apply them to their future relationships, both romantic and otherwise.

Looking back, I think that my parents were trying to shield us from their fighting when my siblings and I were young, and personally, I think it ended up doing more harm than good. The truth is that marriage is tough, but it's also so rewarding, and there's most definitely no perfect marriage. It requires work every single day, and requires choosing each other without a shadow of a doubt, even when it's hard to. Learning this lesson on my own was difficult, but I'm glad that I've learned that the illusion of a "perfect" marriage is just that: an illusion.

I want my kids to look to their dad and me for cues on how to handle disagreements so they can enter adulthood as well-rounded individuals. It’s our job to help make that happen, and it’s a lesson they'll never, ever learn if my husband and I shielded them from real-life learning situations.