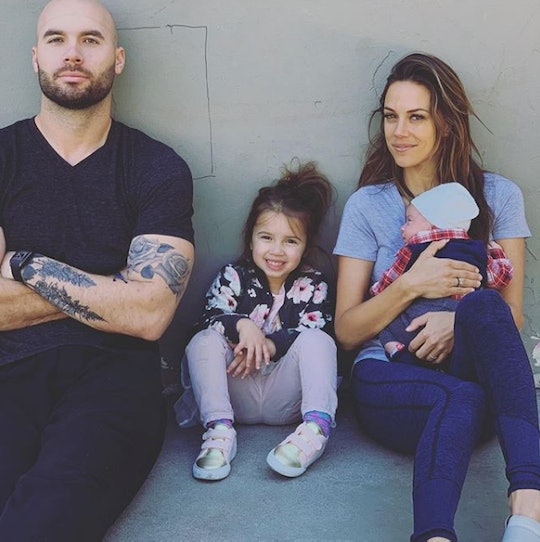 Once upon a time it was somewhat unthinkable to argue in front of your children. The problem with that? Hiding conflict from our children doesn’t keep them from detecting the tension and experiencing stress — that is why Jana Kramer and Mike Caussin aren’t afraid to fight in front of their kids. One Tree Hill star Kramer and former NFL player Caussin believe that letting their kids witness their “conflict resolution” skills will teach them healthy ways to deal with disagreement.

The couple take a very open approach to all facets of their life together, but their approach to modeling communication for their kids fits with the research. As developmental psychologist Diana Divecha, PhD argued in a 2014 post on her blog Developmental Science, children can “actually benefit” from watching their parents resolve arguments. .

Kramer and Caussin’s relationship, begun in 2014 after they met on Twitter, has not always been picture perfect. They were married in May 2015, welcomed their first child, daughter Jolie, in January 2016, and just seven months later announced a separation, as originally reported by ET Online. Since then, both Kramer and her husband have been very open about his sex addiction. So open that they frequently discuss it on their podcast — During the March 25 episode, Kramer explained that she stayed with Caussin through his infidelity and addiction for their daughter, as reported by Us Weekly.

That brings us to present day, with Kramer and Caussin not only still together, but having welcomed a second child, son Jace, on Nov. 29, 2018.

“I know it's been hard for us to be a super open about things and some people are like, ‘That's oversharing.’ And you know, just some people are very personal and some people keep things to their chest and that's okay,” Kramer tells me during a recent visit to the Romper office in New York City.

We want to have a dialogue with our kids and we want them to see us have that dialogue with each other so our conflict can become teaching moments for our kids.

With Caussin sitting adjacent to her and listening carefully, Kramer continues: “I think everyone can have their own experience of how much they share. But for us, this is how we share and what we've seen that helps. But it's really, you know all about kind of your own personal comfort.”

Kramer is not only referring to the number of times she and Caussin have spoken publicly about their relationship troubles, but what they address on their podcast. In fact, the parents of two are taking “Whine Down” on tour that they can “create a more intimate physical setting” to “connect” with “other human beings,” says Caussin.

Speaking of other humans, let’s get back to the two tiny ones — Jace and Jolie — Kramer and Caussin are raising. Jolie turned 2 in January, while Jace is just going on six months. So how do Kramer and Caussin handle their issues with two small children in the house?

“Like when we fight in the house?” asks Kramer.

“It's definitely hard because, you know, that's one of the things that we still need to get better at... having healthy arguments,” Kramer explains to me carefully as Caussin nods silently in agreement. “But also, you know, a therapist told us that it's really important for kids to not see the perfect family. It's important for kids to see a healthy argument with resolve.”

“I feel like parents, at least in previous generations, at least our parents, they do kind of have that ‘don't fight in front of the kids’ and they kind of sell themselves as ‘we have it figured out, we're your mom and dad listen to us, we know it's best where there's no dialogue,’” says Kramer. “And so we want to have a dialogue with our kids and we want them to see us have that dialogue with each other so our conflict can become teaching moments for our kids. So you'd be like, ‘Hey, you know, mommy and daddy, we were discussing this, you saw us argue. This is why, this is how we resolved it.’ And just kind of help them get used to that, you know, interaction.”

To add to that, Kramer and Caussin agreed they want their children to know that they are human. That they “don’t have this figured out,” that they are still “trying” and they are definitely “not perfect.”

This might sound like a scary concept to some parents, especially when they’re up against the Instagram-perfect life so many families display on social media. But Kramer and Caussin’s willingness to be honest with their children is pretty refreshing, and you have to imagine that it removes a lot of the unnecessary added pressure of trying way too hard to be “perfect” 24/7.

“Whine Down” is headed to Virginia, New York, and Massachusetts in May 2019. You can get tickets to see Jana Kramer and Mike Caussin record their live podcast at JanaKramer.com.