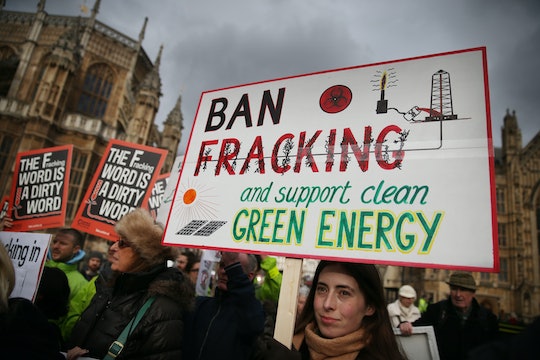 Why Our Children Need The March For Science

On Saturday, scientists and their supporters will be taking to the streets of Washington, D.C. and other satellite cities in order to support scientists and the vital role they play in society. It definitely hasn't gotten the same amount of attention as other recent marches have, but it's an important — and much-needed — demonstration. In fact, there's several reasons why our children need the March for Science now more than ever.

"People who value science have remained silent for far too long in the face of policies that ignore scientific evidence and endanger both human life and the future of our world," March for Science organizers wrote on the event's website. "The application of science to policy is not a partisan issue."

It can often seem like a partisan issue in the United States, however, with religion on conservatives' side and science on liberals'. And that partisan view of science is hurting children, whose generation will bear the brunt of our inability to accept the objective, evidence-based truth that science provides us with.

Recently, the country's ability to ignore science when it's convenient has yielded pretty disastrous results for Americans. There's the proposed gutting of the Environmental Protection Agency, politicians' continued desire to eliminate access to abortion, and the fact that this year alone, eight states have pushed to allow religious theories into science classrooms, according to The Independent.

But the thing is, our children are the ones who are going to pay the price if we let politicians ignore evidence-based science when they craft policies. Politicians routinely deny the evidence stacked in favor of man-made climate change, arguing that environmental protection harms businesses across the United States — but every time policies are based on the denial of existing scientific evidence (such as cuts to the EPA and other science and environmental agencies, attempts to block access to abortion and contraceptives, and the undermining of science education), our children's future declines.

They're denied the social- and economic-boosting effects of accessible women's health, denied a basic understanding of what constitutes scientific theory (rather than religious belief), and are having the future of sustainable jobs sacrificed in order to preserve today's less eco-friendly jobs. Most importantly, they're subjected to the dangerous environmental impacts of putting profits over sustainability.

The American Academy of Pediatrics has already called climate change a major threat to children's health, and pollution is already linked to the deaths of 1.7 million children a year, according to the World Health Organization. According to USA Today, global problems driven by climate change — including droughts, wildfires, heat waves, and flooding — are only set to get worse over the next few decades.

"I was worried enough about these problems before having kids that I maybe wondered whether it was a good idea," Simone Alin, mom of twins and an oceanographer for the National Oceanic and Atmospheric Administration, told Rolling Stone in 2015. "Now, it just makes me feel crushed."

If you'd like to advocate for basing policies on evidence and science, consider joining a March for Science near you. If you can't make it in person, there are other ways that you can march for science in spirit and still make a difference. And if your kids want to join, all the better.

More Like This
Husband Of Massachusetts Mom Accused Of Killing Children Asks Public To Forgive Wife
Sally Field Is The Ultimate Cool Mom Who Once Tried To Set Her Son Up With An Olympian
71 Instagram Captions About Love, Because It's All You Need
Kit Harington Announced His Wife Rose Leslie Is Pregnant With Their Second Child
What Parents Are Talking About — Delivered Straight To Your Inbox