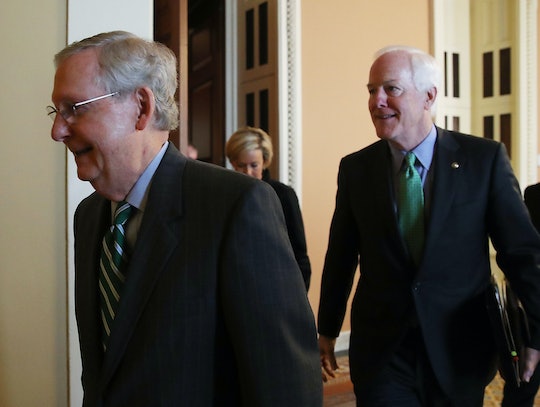 People Are Creeped Out By The Health Care Bill Name

On Thursday, GOP senators finally unveiled their new health care bill. Considering the bill was drafted behind closed doors, Americans have anxiously awaited the bill's release, especially since it was expected to strip away many protections in President Barack Obama's Affordable Health Care Act. Unfortunately, the name for the new health care bill is unnervingly similar to another acronym. The bill, dubbed the BCRA (Better Care Reconciliation Act), is disturbingly similar to BRCA, the gene for breast cancer (BRCA1 and BRCA2, officially). The acronym is especially upsetting when you consider women had coverage for genetic testing for breast cancer for the first time under Obamacare, and doubly upsetting because not a single woman was involved in the drafting for the new version of the bill.

When Obamacare was first rolled out, many women, especially those who had a high risk of developing breast cancer, were relieved to learn genetic counseling and testing were considered free preventive services under the law. According to the Affordable Care Act, "genetic counseling and BRCA testing, if appropriate, must be made available as a preventive service without cost-sharing." Obviously, this was a big deal considering "1 in 8 U.S. women will develop invasive breast cancer over the course of her lifetime," according to BreastCancer.org.

Genetic counseling and BRCA testing is incredibly important overall because it allows women to take preventative and potentially life saving measures against breast cancer. In short, it's safe to say free BRCA testing has improved the quality of life for many women and their families.

All that being said, it's confusing, upsetting, and coincidental (in a gallows humor kind of way) that Republicans ended up using a similar acronym to BRCA for their new healthcare bill. One can't help but think this bill is GOP senators thumbing their nose at women in real time, considering the bill's provisions won't cover this essential testing, according to The Washington Post. It's maddening when you consider not a single women was present in the drafting of the bill, and that the BCRA is an attack on women's health and reproductive rights in general. Essentially, the bill aims to defund critical services provided by Planned Parenthood, like preventive screenings, abortion-related services, and emergency services.

Obviously, the creepy acronym used for the bill has peeved social media users. Many concerned Americans have taken to Twitter to express their disgust the fact that the BCRA would strip a service like BRCA testing, and yet its name is so similar and was derived by a group of men.

Although it's clear a lot of people are upset by this coincidental or not so coincidental similarity, it's likely Republicans won't care either way. Even though the BCRA might just be another Republican gaffe (because there are many) as opposed to an intentional slight, it ultimately proves the lack of awareness the party has when it comes to Americans' health and well-being. Despite a Quinnipiac University poll showing that 56 percent of voters don't agree with the GOP healthcare plan, GOP senators continued their assault on Obamacare without remorse. The BCRA acronym debacle is just another example of how little consideration the Republicans are putting into their fight to repeal Obamacare, and how it affects their constituents.

If the BCRA acronym was intentional, it's not remotely funny. Even if you are a Republican who supports the new bill, not recognizing the similarity between the BCRA and the BRCA gene is indicative of the face that you don't understand what a good majority of women deal with when it comes to health care. For those Americans who've had breast cancer, are susceptible to breast cancer, or who've lost a loved one to the disease, the acronym is a sad reminder. Not only have Republicans (however unintentionally or coincidentally) disrespected those affected by breast cancer, they also aim to take away essential preventive measures for those who might develop the disease in the future.

More Like This
Mama Mia! Ronzoni Announces Beloved Pastina Is Discontinued & The Internet's Lost It
14 Recipes For Sick Kids When Everyone's Tired Of Canned Soup & Crackers
Why Your Vagina Smells Like Fish & What To Do About It
Why Your Vagina May Be Itchy After Sex & What To Do About It
What Parents Are Talking About — Delivered Straight To Your Inbox