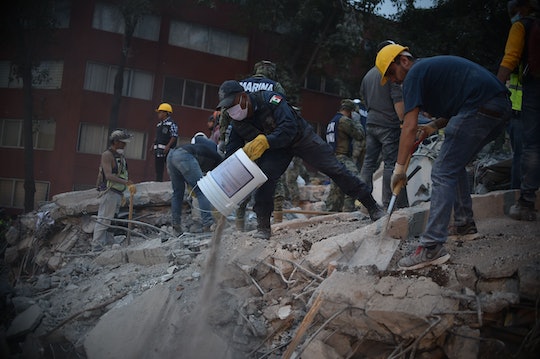 A 7.1-magnitude earthquake hit Mexico City on Tuesday, killing hundreds, and Hurricane Maria is expected to devastate Puerto Rico over the next couple of days. President Donald Trump and others have been tweeting their well wishes, but praying for Mexico City and Puerto Rico isn't enough to help them, and it's certainly not enough to make up for the myriad ways Trump has insulted both Mexicans and Puerto Ricans. Mexico and Puerto Rico need actual help, followed by many, many apologies, and a couple of throwaway tweets sandwiched in between the usual self-praise and rants against Democrats aren't going to cut it.

"God bless the people of Mexico City," Trump tweeted on Tuesday. "We are with you and will be there for you." The sentiment is completely meaningless, though, without an actual promise for specific action. Who exactly is "with" them? Is Trump visiting the city himself? Is he sending the National Guard to help dig out the children still missing under the rubble of a collapsed school? How will he be "there for" them? Has he worked with "Chuck and Nancy" to approve a relief package, and asked for Congressional approval, like he did for Hurricane Harvey Victims? Or was this just a feel-good tweet, like his daughter's?

Later, on Tuesday night, Trump took a moment to acknowledge that yet another hurricane was heading towards American soil: "Puerto Rico being hit hard by new monster Hurricane. Be careful, our hearts are with you- will be there to help!" One wonders, though, if he'll react to the aftermath of Maria the same way he did Harvey — with two visits and nearly $8 billion in relief funding — or if he'll treat Puerto Rico the way that he treated the Caribbean islands ravaged by Hurricane Irma just weeks ago. The entire island of Barbuda has been rendered unlivable, but Trump's comments on Irma left the impression that his only concern was the storm's impact on his adopted state of Florida.

This apparent lack of desire to actually help the people of Mexico and Puerto Rico isn't unique. Social media is awash with people sharing devastating photos and videos of the aftermath, encouraging one another to pray, or congratulating themselves for doing the same. Posts soliciting donations or volunteers are unfortunately far less common than those expressing "sympathy" and "heartbreak," or offering utterly useless sentiments such as "Stay strong" or "My thoughts are with you." The problem is that self-advertising your blandly benign attitude towards natural disaster victims does them absolutely no good whatsoever (and I can guarantee you they aren't on Twitter reading about your prayers); donating money and supplies does. If you simply must advertise what a kindhearted person you are, you can certainly tweet a screenshot of your bank transaction history afterwards.

Mexico's 7.1-magnitude earthquake (the second in just over a week) has left more than 200 people dead, and that number is likely to climb as the missing and buried are eventually discovered. As volunteers worked to free the victims, 5 million people were still without power on Wednesday, according to CNN. And Hurricane Maria made landfall in Puerto Rico early Wednesday morning as a Category 4, the strongest storm to strike the area in 85 years, according to The Washington Post. Puerto Rico Gov. Ricardo Rosselló told Today that he expected it to be "the most devastating storm in the history of our island."

When Katrina hit the United States in 2005, the Mexican military served 170,000 meals in Louisiana and Mississippi, distributed more than 184,000 tons of supplies and conducted more than 500 medical consultations, according to Newsweek. After Harvey hit earlier this month, the Mexican government again offered its assistance, "as good neighbors should always do in trying times." Mexico offered help even though the U.S. president has called its citizens rapists and continually insists that the country pay to wall itself off from the states it wants to help. Puerto Rico is a U.S. territory that doesn't even have equal access to the federal programs it's forced to fund. If U.S. citizens and politicians are truly concerned about the plight of their neighbors and countrymen, it's time to shut our mouths and open our wallets. Pray all you want, but don't confuse it with actually helping to get people medical care and helping them to rebuild their home.