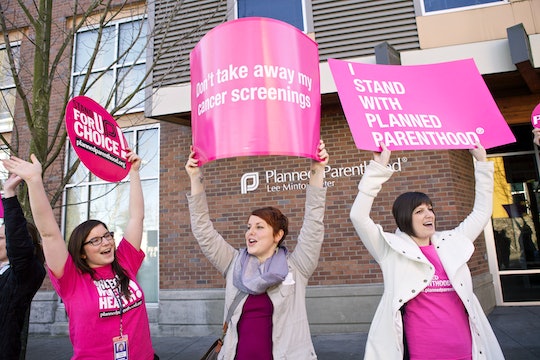 Last week, Vice President Mike Pence cast a tie-breaking vote in the Senate to repeal a recent Obama-era guidance on Title X funds that explicitly prevents states from denying funds to family planning clinics that also provide abortion services. The extent to which this will impact Planned Parenthood clinics isn't precisely known, but the implications are worrying. Here's why restricting Title X funding could cripple Planned Parenthood clinics and negatively affect women's health care all over the country.

Title X, or the Title X Family Planning Program, is a Nixon-era program that provides federal family-planning grants to community health centers. According to the Department of Health and Human Services, Title X is the only federal program "focused solely on providing family planning," and it specifically ensures birth control and STI testing access to low-income individuals.

Planned Parenthood clinics can apply directly for Title X grants — making them direct grantees — or apply for Title X funds from the state, which in turn receives funds from the federal government. Clinics in the latter situation are at-risk of losing Title X funds if their state funnels funds to non-Planned Parenthood providers. According to a 2016 Christian Science Monitor article, at least 13 states have passed laws restricting Title X funds to abortion providers since 2011.

Planned Parenthood clinics all over the country use Title X funds to provide family-planning services, including birth control, screening for sexually transmitted infections, and cancer screenings. According to Planned Parenthood's website, 80 percent of the organization's patients receive "services to prevent unintended pregnancy."

Importantly, Title X grants do not fund Planned Parenthood's abortion services, which account for 3 percent of the clinic's activities, according to the organization's annual report. Under the Hyde Amendment, passed in 1976, federal funding can't be used for abortion services except for cases of rape, incest, or endangerment to the woman's life — the rape and incest exception was added in 1997.

The Obama-era guidance on Title X funds explicitly highlighted that Title X clinics can't be excluded because they also provide abortion services with non-Title X money — legally, a clinic shouldn't be excluded on this basis anyway, but that hasn't prevented states from trying and succeeding. According toThe Washington Post, Pence's tie-breaking vote effectively gives "a thumbs-up to Tennessee and other conservative states to resume policies blocking Planned Parenthood clinics from getting federal funding through the Title X family-planning program."

The question now is the extent to which individual states will continue to succeed in blocking Title X funds to Planned Parenthood. "There have been lots of states to take away Title X funding to Planned Parenthood, and the effects have been terrible," Lynn said. "This is about the patients. The government is playing politics with people's health care, and their lives, and it is insulting to the patients who rely on this federally-funded program that was started by a Republican president.”

The sheer quantity of individuals serviced by Planned Parenthood means the fallout of Title X cuts could be disastrous. "Four million people depend on the Title X family planning program, and this move by Washington politicians would endanger their health and well being," Dawn Laguens, Executive Vice President of Planned Parenthood Federation of America, said in response to Pence's vote. A Planned Parenthood press release specified that 1.5 million Planned Parenthood patients benefit from Title X funds, with the vast majority of these recipients — 78 percent — living below the poverty line.

Republican lawmakers have argued that Title X funds can simply be diverted to other clinics, but the data shows that Planned Parenthood has a far more comprehensive range of birth control options, including IUDs and emergency contraception. According to a Congressional Research Service report, other Title X clinics provided 1.3 million contraceptive services annually, while Planned Parenthood clinics provided 3.6 million.

According to The Guttmacher Institute, a 2016 survey of Title X-funded health centers "reinforces the importance of Planned Parenthood to the women it serves. Twenty-six percent of clients at a Planned Parenthood site reported that it was the only place they could get the services they need."

An on-point 2012 Mother Jones article looked at Tennessee's 2011 decision to divert Title X funds from Planned Parenthood Greater Memphis to Christ Community Health Services, an organization that, according to Mother Jones, "does not offer emergency contraception." The result? According to a 2012 report, the clinic averaged 51 Title X visits per month, compared to the 841 visits to Planned Parenthood in Memphis during the final month it received Title X funds.

The connection between Title X funds and unplanned pregnancy rates was not lost on the Democratic senators who tried to save the Obama-era protections last week. “Historically low teen pregnancy rates did not happen in a vacuum,” Michigan Sen. Gary Peters said last week, as reported in The New York Times. He said that stripping funds to the clinics best-prepared to offer birth control services would "disproportionately hurt people in rural and underserved areas where these clinics are more often than not their primary source of health care.”

Moving forward, it's likely that many states will be involved in ongoing litigation over access to Title X funds. For the sake of women in these states, the hope is that access to health care and birth control will be protected by the courts.