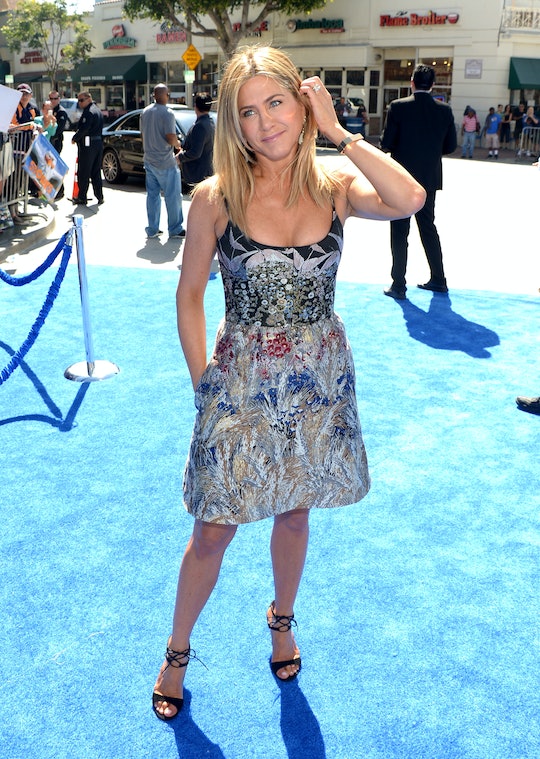 News of Brad Pitt and Angelina Jolie's divorce became public knowledge earlier this week, and speculation about the Hollywood couple's split has been trending fiercely ever since. But news of the couple's marital demise isn't the only thing people are discussing when it comes to Brangelina's split. In the public mind, there's a third person attached to this divorce, despite her entirely separate life, marriage, and career. And while the memes might be funny, saying Jennifer Aniston is happy about Brad Pitt's divorce — when she's actually said nothing of the sort — is absolutely not OK.

The media (and the public) began dragging Aniston into the fray pretty much as soon as Pitt's divorce hit headlines. One media outlet published the headline "Brangelina 2004 - 2016" above a picture of a laughing Aniston. (It also then pinned a tweet of the cover to its Twitter account, seemingly defiant to any backlash it received for the tweet.) Tweets from users read, "September 20th 2016, aka National #JenniferAniston day of redemption. See ya #Brangelina" and "I feel like Jennifer Aniston is having a really good day today." Another outlet ran a story about Aniston's impending divorce from Justin Theroux (now that her ex of 12 years is single again, why wouldn't she drop everything to rush back into his arms?) — a story Aniston's representative had to shoot down — and Us Weekly quoted a source who said Aniston believed the divorce was "karma."

While I love a Rachel Green meme as much as the next person, can we please stop making Pitt's divorce about Aniston? Tying her to the news of Pitt and Jolie's relationship undermines everything Aniston has accomplished in her personal and professional life, and leaves us with the narrative that a dumped woman will never, ever get over her ex.

I don't know Jennifer Aniston. But I do know that since she and Pitt were officially divorced in 2005, she's starred in 22 movies, acted in four TV shows, and completed two video shorts. She's also executive produced eight movies, directed two films, and won countless awards for her talent. She celebrated her wedding anniversary with actor Justin Theroux just last month, and recently penned an intelligent, spot-on op-ed for The Huffington Post.

Not to mention, over a decade has passed. Insinuating that Aniston has held onto a breakup grudge for 12 years — 12 years! — implies that she's very bitter and begrudging, rather than the raging success story that she is.

Finally, one of the things people seem to forget? When people treat Aniston as this vengeful or pining ex — when nothing about her alludes to that sad reality — it makes it OK for the world to paint other women in that same image: as vulnerable creatures, helplessly dependent on the whims of a man. (He dumped her? She's broken and lonely forever! He's single again? She must want to claw her way back!)

The way Aniston is currently being treated has everything to do with how the world portrays women — and it's up to us not to take part in that. As Aniston wrote in her Huffington Post piece in July:

If I am some kind of symbol to some people out there, then clearly I am an example of the lens through which we, as a society, view our mothers, daughters, sisters, wives, female friends and colleagues. The objectification and scrutiny we put women through is absurd and disturbing. The way I am portrayed by the media is simply a reflection of how we see and portray women in general, measured against some warped standard. ... Here’s where I come out on this topic: we are complete with or without a mate, with or without a child.

Aniston has clearly decided that enough is enough. Maybe it's time the rest of us to do the same.