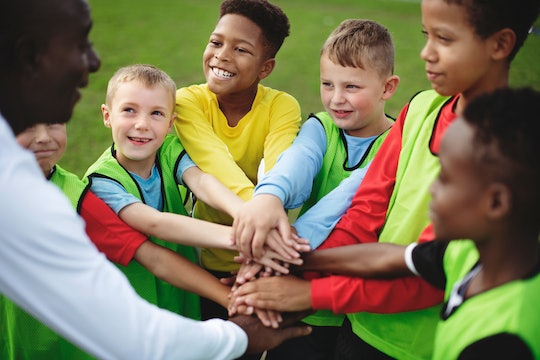 It can be really difficult trying to stay organized when your kids head back to school. First of all, everyone's schedule tends to be slightly off after the summer holidays. Then there's the whole trying to get your kids excited about being at school again, that's a bit of a chore. And on top of that you're supposed to figure out some form of engaging extracurricular activities for them to join? I totally understand why some parents might take a pass on that part, but here's the thing: it might be worth the effort because some new research has found that signing your kids up for team activities is a great idea for a few surprising reasons.

A team of researchers from the University of British Columbia. surveyed a total of 10,000 children who were in a few different groups, according to the CBC. One group of children weren't involved in any extracurricular activities, another involved in both team and individual after school lessons, with the two final groups split into those who just did teams and those in solitary pursuits like music lessons.

The children were first surveyed with questions about their mental well-being, their relationships, and their self-esteem when they were in grade four and again in grade seven, to give scientists a true sense of how team activities might affect kids, according to the study published in the Journal of Youth and Adolescence earlier this week.

Lead author of the study Eva Oberle noted that children who were involved in team activities experienced a better sense of optimism in general and tended to be more satisfied with their lives than those who didn't. "It’s a stronger sense of belonging to the peer group, not necessarily the activity itself, that seems to drive the mental health benefits of participating in activities that included team sports," Oberle told the University of British Columbia's Faculty of Medicine.

Oberle also noted that it really shouldn't be an either/or situation when it comes to team activities or solitary pursuits. "The results of our study shouldn’t be interpreted as ‘team sports are good’ and ‘individual activities — like tutoring or music classes — are not," Oberle explained to the university. "The key point is that extracurricular activities that allow children to establish meaningful relationships with their peers can support their positive mental health."

She continued, "Group activities like team sports may naturally do this, whereas other activities may need to deliberately integrate some additional strategies to better support peer connectedness."

While parents might find it tough trying to organize extracurricular activities for their kids, particularly if they have more than one child's schedule to consider, the long-term benefits seem to be worth the trouble. As Crimson Education explained, children who were involved in after school activities enjoyed improved academic performance, higher self-esteem, and picked up life skills like leadership and public speaking along the way.

Of course, after school programs can also be financially prohibitive for parents. Fortunately there are several federal programs that offer financial assistance in these cases. Because every kid should have the chance to enjoy some after school team activities.