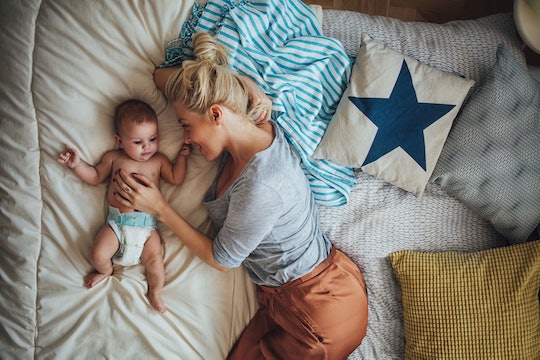 The April 12 recall of the Fisher Price Rock n’ Play struck a chord with moms everywhere — and not just because it’s a baby registry staple, or because it seems to be a no-fail soother for wailing newborns with its soft noises and gentle inclined motion. The recall horrified moms because it validated our deepest, darkest fear: we’re smart people who make unsafe sleep decisions.

Nearly 5 million Fisher Price Rock n’ Plays were recalled (mine included), just days after American Academy of Pediatrics President Kyle E. Yasuda, M.D., FAAP, released a statement asserting there was “convincing evidence that the Rock n’ Play inclined sleeper puts infants’ lives at risk.” The Rock n’ Play has been linked to 32 infant deaths since 2011, per that statement, with some of those infants rolling over while unrestrained, and some unable to breathe in the correct position in the device.

Sometimes it can feel next to impossible to keep up with the do’s and don’ts of parenting, but for millennial moms, safe sleep has practically been drilled into our brains. The AAP recommends the “ABCs” of safe sleep: place the baby Alone, on her Back, in a bare Crib. Add to that the number of tips and tricks that experts say can reduce the risk of SIDS (Sudden Infant Death Syndrome), from giving baby a pacifier, to keeping the room between 68 degrees and 72 degrees and using a fan to circulate the air, and suddenly bedtime has turned into a checklist of epic proportions. I followed every single one of them religiously, in addition to using an Owlet to monitor my son’s heart rate and oxygen levels, placing him in the SNOO Smart Sleeper bassinet (now available to rent through Happiest Baby for around $3 a day) so he couldn’t roll over and occasionally (fine, frequently) placing my hand onto his chest to make sure he was breathing during the night (technology can malfunction, right?!).

My daughter slept overnight in the Rock n’ Play next to our bed, because she had reflux and we felt more comfortable with her sleeping propped up.

Safe sleep obsession aside, I couldn’t shake the feeling that I had dodged a bullet with the recall of the Rock n’ Play. I used it for daily naps during the first eight weeks of my baby’s life, even leaving my newborn asleep in it while I took a quick shower or let the sleep deprivation take over and napped alongside him. And I am not alone among my fellow millennials — together, the most educated generation of parents in history, per the Pew Research Center.

Alicia Donohue, 34, of Albany, N.Y., used the Rock n’ Play with her second daughter. “My daughter slept overnight in the Rock n’ Play next to our bed, because she had reflux and we felt more comfortable with her sleeping propped up,” Donohue tells Romper. “We think she felt snug, and it helped her sleep for the first few months.”

Romper spoke to Dr. Harvey Karp, one of the most-trusted pediatricians and child-development experts (and inventor of the SNOO Smart Sleeper), about the recall. “Most people aren’t there every second to supervise, and tragedies happen in just an instant,” Dr. Karp says. “Inevitably, when you’re exhausted and it’s the only place your baby will sleep, you don’t make good decisions.”

Tara Temple, 33, of Ballwin, M.O., can relate. “I definitely fell asleep with my daughter on the couch, because she went through a stage where she would only sleep if held,” Temple tells Romper. “I never moved an inch, but I was exhausted.”

The sleep deprivation is no joke: new parents lose 44 days worth of sleep in the first year of their baby’s life, per a survey by Ergo. The National Sleep Organization likens the effects of sleep deprivation to those of alcohol. A loss of sleep has also been linked to perinatal mood disorders — a study in Iran found that women with poor sleep quality in the postpartum period were three times as likely to experience depression, echoing the findings of a longer study following women to 36 months postpartum and published in Sleep.

Dr. Karp points to micro-sleep, or short bursts of sleep that happen without the person even being aware they took place, as being an immediate risk. “Half of your brain is already asleep even though you’re awake,” Dr. Karp says. “That happens all the time with new moms.”

Decision-making is also broadly affected by sleep deprivation — we break the rules when we are tired.

Bed-sharing, when a parent and infant share the same adult bed for some or all of the night, is another practice that has risen in the past two decades, despite being at odds with the AAP recommendations for safe sleep.

“It’s a fallacy that there is safe bed-sharing,” Dr. Karp says. “There is safer, but not safe.” He refers to a study that found that bed-sharing was a natural result of frequent nighttime feedings, with only 20 percent of babies starting the night bed-sharing, and approximately 60 percent of them ending the night in their parents’ beds. In other words, parents don’t necessarily intend to bed-share, but wind up falling asleep with baby because they are exhausted — and falling asleep with a baby on a couch or armchair is far more dangerous than on a clear flat surface.

I definitely fell asleep with my daughter on the couch, because she went through a stage where she would only sleep if held.

"The evidence that parent–infant sleep sharing is associated with sudden and unexpected deaths in infancy (SUDI) in certain hazardous contexts is strong," concluded a 2016 paper in ACTA Paediatrica. Even as SIDS deaths have dropped since the '90s, thanks to the back-to-sleep initiative, accidental suffocation and strangulation deaths have risen steeply, reported Pediatrics in May, are associated with smothering, loose bedding, and positioning wedges — altogether, accidental suffocation is the leading cause of death for infants under one year of age.

Kara Wilson, 33, of Morris Plains, N.J., admits to letting her toddler bed-share. “We chose to let our daughter sleep in our bed because we felt guilty about moving,” Wilson tells Romper. “She was confused and upset, but it was a poor decision because she had never asked before and now it has become a habit.”

Many baby products are not designed for sleep — and come with disclaimers around their use as a sleep product — but are nevertheless used for sleep. Take the DockATot, which parents love to use for infant sleep, and which is not regulated as a sleep product, despite its “breathable fabric.” Car seats, swings, bouncers, and sleep positioners are all classified as unsafe for sleep by the AAP, and yet frequently used by parents driven to exhaustion.

So while the Rock n’ Play is out of the picture, the discussion on infant safety doesn’t end here. Dr. Karp stresses the importance of adding to the safe sleep story by educating parents on how to improve sleep in the first place, so they aren’t drawn to unsafe practices when exhaustion is at its peak, especially given that part of the safe-sleep recipe is detrimental to infant sleep. “Babies are now on their backs in a flat, still bed as soon as they’re born, because it’s safer — but no sound, no motion, no swaddling,” Dr. Karp says. “In essence, we take away everything they ever knew about sleeping.”

Dr. Karp recommends white noise to imitate the womb experience and activate a baby’s calming reflex. “When a baby is in the womb, they’re underwater,” he says. “Water filters out high-pitched sounds, so a loud, low and rumbly white noise will make them fall asleep.” The closer the sleep environment is to the womb, the better: from tight swaddling to white noise and gentle motion. (While it comes with a high price tag, Dr. Karp’s SNOO Smart Sleeper checks all these boxes and worked wonders for me.)

In addition, we can start a conversation around the challenges that arise with sleep deprivation, be clear about techniques that will get new parents more sleep (in the process debunking myths about sleep training), and encourage them to ask for help. As a new mom, I tried to remember that visitors were coming to see the baby, and when they offered to let me rest, I pushed aside the guilt that said I should be the perfect hostess and climbed (gratefully) into bed. This feeling of support gave me more confidence when the dusk-to-dawn duties rolled around and ultimately led me (along with all that technology) to make safer sleep choices for my family.