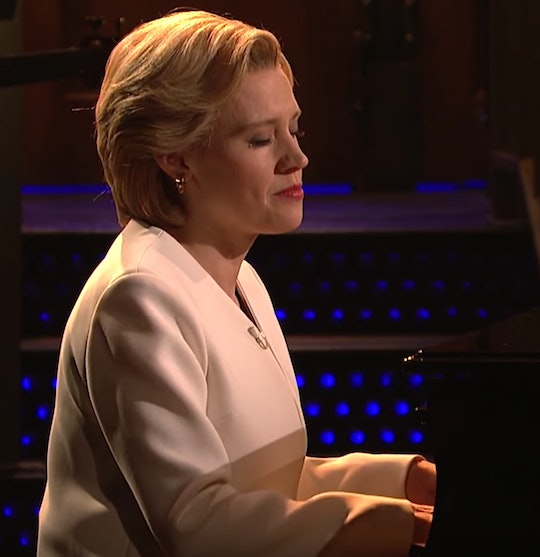 Why 'SNL's Hillary Clinton "Hallelujah" Open Was Required Viewing For All

The initial image of the first post-election Saturday Night Live episode included the elements many of its viewers would have expected a week ago: Kate McKinnon alone on the stage, decked out as Hillary Clinton in a symbolic white suffragist pantsuit. But America wasn't tuning in for the celebratory introduction to the show they had anticipated before Donald Trump claimed the presidency in a shocking upset. Instead, it was for solace as we grapple with what this means about and for us as a nation, and McKinnon as Clinton delivered a sliver of the balm so many of us need right now with a rendition of the recently deceased's Leonard Cohen's "Hallelujah." In essence, SNL's Hillary Clinton "Hallelujah" cold open is an acknowledgement of the devastation much of the nation is feeling right now, as well as a hopeful glint of the power to overcome.

At least for the first few minute of the show, SNL eschewed humor in favor of something more aligned with the deep feelings of disappointment, fear, and even shame many Americans feel over the election of a KKK-endorsed white nationalist to the nation's highest office. Singing Cohen's mournful ballad from the perspective of the defeated Clinton, McKinnon belts some lines that are especially heartbreaking in light of the election results: "I did my best, it wasn't much" and "Love is not a victory march."

It's haunting, it's moving, and, if it weren't so beautiful, it would be tough to watch. But SNL's Hillary Clinton cold open should also be required viewing for all people who plan to combat Trump's rampant racism and xenophobia throughout the next four years, and beyond. And that's especially true for white people, who also have to grapple with the reality that it was the people who look like us who overwhelmingly showed up for Trump. At once a rallying cry and a lamentation of what could have been as well as what's surely to come, McKinnon's performance encapsulates the discontentment and anxiety that permeates the United States of America right now — and that's been pervasive for people of color for much, much longer.

Already, Donald Trump's stunning stunning ascendency to the status of president-elect last week has emboldened both those jubilant about and devastated by the election's results: Hate crimes inspired by Trump's white nationalist ethos have proliferated dramatically, while #NotMyPresident protests across the country have united thousands who reject the messages of racism, misogyny, and xenophobia that his campaign telegraphed. It's disconcerting, and that's why we so needed McKinnon's closing message, when she turned to the camera after the mournful, soulful rendition of "Hallelujah." "I'm not giving up, and neither, should you," she says, and it's impossible to discern whether she's speaking as herself, as Clinton, or both.

What is clear is that McKinnon and the good people at SNL believe there is a path forward that doesn't fall in line with Trump's bigotry (or the tacit approval of it) or succumb to complacency once he takes the oath of office. There's the positive action than many are already taking: supporting minority-owned businesses; donating both time and money to charities like the American Civil Liberties Union, Planned Parenthood, and LGBTQ community centers; and just plain getting to know people who have different background and life experiences that you. There's the resolve to stand by one another and to defend the more vulnerable groups that Trump has already offended and threatened. There's the knowledge that while it's OK to grieve, the more important and meaningful step is to fight.

With her Hillary Clinton cold open, McKinnon does both. Moving forward, her performance is s reminder that there is still empathy in the world — and the will to stand up for convictions and what's right, no matter what.