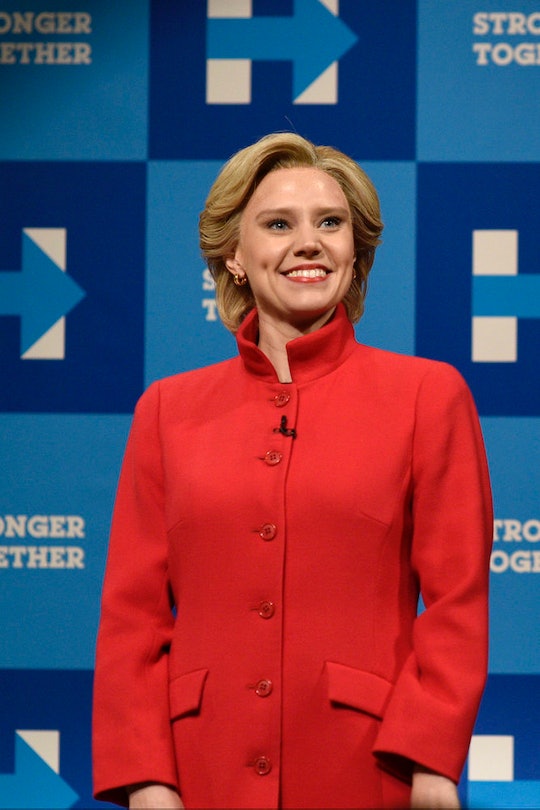 Kate McKinnon has come to be known for her Hillary Clinton impersonation on Saturday Night Live and with the election finally over with, it was expected that viewers would get McKinnon's Clinton once again. So when Kate McKinnon sang "Hallelujah" on SNL as Hillary Clinton, it was emotional for pretty much everyone. Just five days ago Leonard Cohen, the original songwriter of "Hallelujah," died, so paying homage to his memory made the performance twice as moving.

Playing Clinton on SNL for so long, McKinnon has been a vocal supporter of the former presidential candidate and during her performance on "Hallelujah" on SNL, you could see and hear the emotion. Without an introduction to the song or performance at all, McKinnon was shown alone on-stage at a piano and began singing.

When she was done, she turned to the camera and said, "I'm not giving up and neither should you," and honestly, it was hard to tell if it was McKinnon or Clinton saying it. But I like to think that it was a little of both, because along with all of the other women in America who have felt this election hard, McKinnon obviously felt the results just as much.

And as to be expected, Twitter reacted to McKinnon's performance on SNL as Clinton just as it should have. Even if you aren't particularly political or didn't follow the election as closely as so many of your Facebook friends, you had to give it to McKinnon, who sang on-stage with so much feeling that you could feel the loss she felt in the election too. And she might have spent months playing Clinton on SNL, but the emotion she showed was in no way due to her amazing acting skills.

The election might be over and Trump might be the president-elect right now, but that doesn't mean that the next four years of SNL won't still be heavily dedicated to not only Trump but Clinton, as this election was arguably one of the most heated and exciting as far as recent presidential races go. So even if McKinnon mourned the victory of another party tonight, fans will more than likely still see her portraying the former candidate in episodes to come.

Somehow, McKinnon playing Clinton for so long as made the former first lady even more lovable to people who'd already supported her and luckily for fans, that's probably not going anywhere anytime soon.