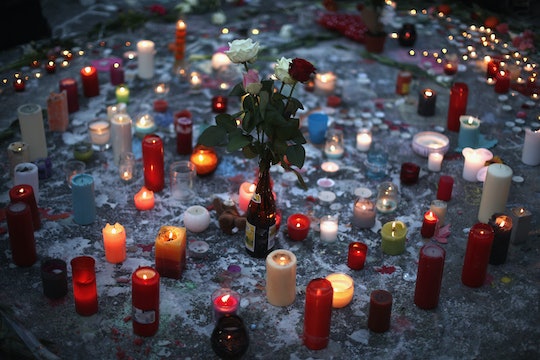 Why The Victims Of The Brussels Attacks Deserve Our Attention, Not The Attackers

As the names of the victims from yesterday’s Brussels attacks are slowly released, I can't help but remember all of the reasons I fell in love with Brussels so much in the first place. I lived there for a short time more than a decade ago and it was, as I remember, a wonderfully diverse city. Ten years ago, Brussels was, for me, a city saturated with character, and I always felt like that very diversity brought Brussels beautifully to life. I can only hope that amidst such devastating tragedy, it will be the thread that holds this magnificent city, its people, and the world together.

We’ve all seen the images of the city, of the victims, of the three alleged suspects who left the world speechless on March 22. I found it hard to look at the graphic images, but equally as hard to look away. It's easy when something as devastating as the Brussels attacks happens to focus on the horror, the destruction, and the people responsible. Human nature drives us to seek answers, especially in the midst of tragedy, when uncertainty weaves its way through us. We cling to understanding and logic as we try to make sense out of an event that couldn't possibly make sense. It's natural for our brains to take over; it's our survival instinct. But we should shift our attention from our brains to our hearts and step away from our inherent desire to understand the motives behind the attackers. We should turn, instead, toward the remembering the Brussels victims.

When tragedy happens, whether on a personal or global scale, it's much easier for me to turn my attention toward the efforts to seek justice. I let my anger build up a wall between me and my surroundings, and often, that frustration keeps me hidden firmly behind it. But focusing on justice and seeking out information about the attackers only perpetuates the terror they're trying to circulate. It’s what they want. They want fear to rip our humanity apart. They want anger to shred through our hands as we hold one another tightly. They want to create division in a world working effortlessly toward connection.

And we should do everything to stop them.

That's how I remember Brussels: a city full of strangers who'd do anything to help one another.

I remember the first time I took the train into Brussels from my home just outside the city. I was 18 years old, horrible with directions, insecure, and scared to death of forgetting my way from the metro station to my new school. I’d made the trip a few times before with my parents and once with a new friend, but this was my first solo ride. Inevitably, I got lost. I stepped outside of the train station and went the wrong way. Everything looked different than it had the previous times, and as I found myself walking further and further away from the station, I began to feel scared. I sat down on a tree stump and began to cry.

A stranger walked over and sat down next to me. I was nervous and hyper vigilant from a past trauma (I was attacked in Buenos Aires when I was 15), but when the man realized he was speaking to me in a language I didn’t recognize, he switched to English. He wanted to help me. He didn’t know where my school was, but he stopped another stranger to ask for her help. Then he stopped another. And another. In the end, it took five strangers to get us where I needed to be, but that first man stayed with me the entire time. Five perfect strangers who came together to help me find my way that day. That's how I remember Brussels: a city full of strangers who'd do anything to help one another.

I don't know if there is a perfect way to end terrorism. I don't have any immediate solutions. I am just one person. But I know that terrorists want us all to focus on them and their actions. They want to break us apart, build walls between nations, breed fear in place of peace. So let's not let them.

I’ve visited several countries since leaving Belgium more than 10 years ago, but none have filled my heart with as much love as it did. I miss the laughter. Every restaurant, every bar, and every street corner were always filled with it. Walking through Brussels felt like listening to the choruses of 20 different radio stations, all playing the same song.

When I lived in Brussels, I was a stranger. Yet the people who lived there saw me. They didn't treat me as other or ignore me in my time of need. Instead, they came straight to me. They helped me.

Three alleged terrorists made a terrifying attempt to silence that laughter yesterday, but the voices of the survivors, the families who lost loved ones, and the world were louder in response. Though it is repeated, time and time again, after every tragedy, it's still true: the voices of hope and compassion and camaraderie are louder than any bomb, any explosion, any threat of terror. And though I know it doesn't mend the hearts in mourning, I hope that it does comfort them.

When I lived in Brussels, I was a stranger. Yet the people who lived there saw me. They didn't treat me as other or ignore me in my time of need. Instead, they came straight to me. They helped me. I hope that in the aftermath of the devastating attacks, we can offer them the same kind of humanity. I hope we can let them know, in both big ways and small, that we see them. That we want to help them. That we will run, not walk, straight to them in their time of need. And I know that by focusing on the victims, and by letting their stories sing louder and longer than any terrorist video, we can whittle down the shriek of terror to a murmur. We can take from them the very thing they want: a voice.

I don't know if there is a perfect way to end terrorism. I don't have any immediate solutions. I am just one person. But I know that terrorists want us all to focus on them and their actions. They want to break us apart, build walls between nations, breed fear in place of peace. So let's not let them. If we shift our focus to the victims and their families and offer each other love, compassion, kindness, and empathy, we can show the faces of terror that we're making an investment to protect humanity. In the coming days and weeks, instead of turning up the volume when a new report about the alleged suspects is made available, I am going to remember the names of the victims in the Brussels attacks, like Adelma Tapia Ruiz, a 37-year-old mother of 4-year-old twin girls; and Olivier Delespesse; and Léopold Hecht, a 20-year-old law student who had a whole life to look forward to. I'll repeat their names and offer their families my love, long before I ever stop to wonder about the names of their alleged killers.