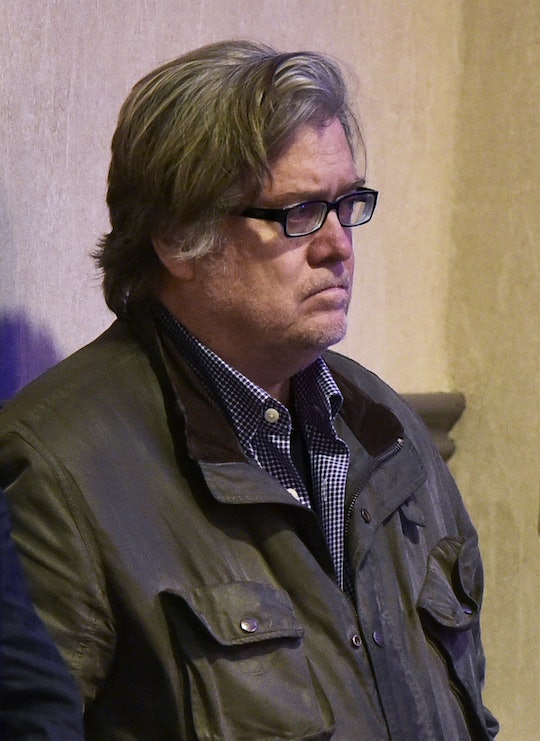 President-elect Donald Trump has announced that his new chief strategist will be Steve Bannon, formerly of Breitbart News. Bannon, whom many have accused of being a white nationalist, misogynist, and anti-Semite, is likely to have outsize influence in the Trump administration, and now, both Democrats and Republicans are speaking out against the dangers he may pose. There are many ways to add your voice to the chorus of opposition, because just tweeting #StopBannon isn't enough.

A quick refresher on why Bannon's new influence is potentially so dangerous: Under Bannon's leadership, Breitbart became a haven for the alt right, spreading hatred, xenophobia, misogyny, anti-Semitism, and racism. Sample headlines from the site include "Would You Rather Your Child Had Feminism Or Cancer?" and "Hoist It High And Proud: The Confederate Flag Proclaims A Glorious Heritage." Not only did Bannon allow all of these articles on his site, he has echoed many of those views personally.

A long list of groups have condemned Bannon's appointment. But how do concerned Americans without such a public megaphone stop him? Luckily, there are plenty of ways to take action against Bannon, and the hatred he espouses.

A list making the rounds on social media highlights ways to help. First and foremost, you can look up your representatives, and give them a call urging them to speak up. (Calling is generally the most effective way to make your voice heard, rather than emailing or tweeting at your representatives.)

It's especially important to call Speaker of the House Paul Ryan, who had a conflicted relationship with Trump throughout the president-elect's campaign. His main office in Washington, D.C. can be reached at (202) 225-3031, while his Janesville office is (608) 752-4050. (You may have more luck getting through to his local office.) Similarly, Senate Majority Leader Mitch McConnell wields a lot of power, and can be reached at (202) 224-2541 in Washington, D.C. and at a whole host of local district offices.

For those who don't particularly love talking to strangers on the phone, writer Victoria McNally typed up a handy script to use. (Just make to replace the Star Wars names with the real names!)

As the list of actions points out, other helpful steps to take include making signs specifically against Bannon if you're going to any upcoming Trump protests, holding members of the media accountable when they normalize Bannon by calling him "anti-establishment" (or something of that ilk) instead of a "white nationalist," and reaching out to anyone else you know or can contact who has a more public platform and might be willing to speak up.

President-elect Trump has shown himself to be unpredictable and easily influenced (after all, he even indicated he might be softening his hard-line position on Obamacare after talking with President Barack Obama). It's extremely important that he be advised by people with good judgement, rather than a white nationalist with a litany of dangerous views.