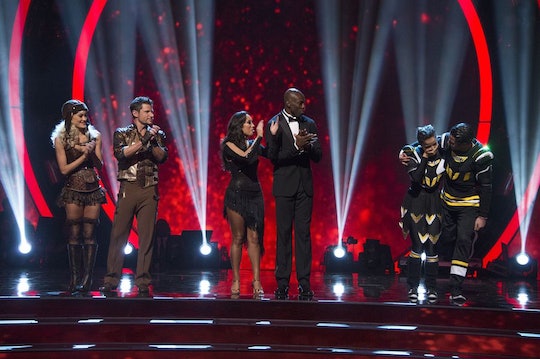 Halloween Night On 'DWTS' Came With An Extra Scare

I knew there had to be a double elimination at some point in the coming weeks on Dancing with the Stars, but I did hope that there would be a little more warning than there was on Monday night's episode. Why was there a double elimination on DWTS? Fans were not pleased. And neither am I, to be quite honest. Sometimes this show does this to the fans, shocking us with an unexpected switch-up, but I would have thought they would have teased something this game-changing beforehand.

At this point in the game, it's becoming more and more clear who the frontrunners in the competition are. That would be Jordan Fisher and Lindsey Stirling, and potentially Frankie Muniz if he keeps up this streak. It's also fairly clear who the contestants are who are trailing in the competition. Sure, Vanessa Lachey and Nikki Bella weren't generally at the top of the leaderboard, but they are both capable, graceful dancers who I think have been getting underscored lately. But regardless of my feelings, they were both given the axe at the end of the Halloween Night episode, in a fairly blunt and unexpected move from the producers. Man, that was cold.

Twitter isn't the only place that people were shocked by this double whammy of an elimination. From the looks of things, even the hosts Tom Bergeron and Erin Andrews weren't in the loop about how things were about to go on this show. Right before the elimination they were each handed an envelope with their name on it by a guy in a Grim Reaper costume. They both looked a little blankly at what they held in their hands before Bergeron awkwardly murmured that this was definitely a surprise.

If you have read anything I've written about this show before then you'll know that I have some pretty strong opinions about the judging and contestants in this particular ballroom. So for me, the biggest surprise wasn't that there was a double elimination, it's that neither Terrell Owens nor Drew Scott were one of the people eliminated. Quite frankly, I'm a little baffled that both of these men are still in the competition, while Bella and Lachey have just been kicked off. I've said it before and I may have to say it again, but these guys just aren't as good as the women who just left the show.

Now, for everyone who is shocked by the double elimination, you had to have seen this coming if you've been paying attention. Monday night's episode started with eight contestants left. But assuming the show is going to end right before Thanksgiving as it usually does, there are only three weeks left in the competition. There are usually four contestants left in the final week of the show. That means that the show needed to get rid of four people in three weeks. There had to be a double elimination in order to make the timeline work out correctly. I know it seems harsh, but this is TV you guys. It is a cold, cold world out there, and apparently too cold for Lachey and Bella.

Unfortunately, Bella and Lachey didn't even have time to say their goodbyes to the audience. The show usually drops the elimination right at the end of the show with just seconds to spare, but this time was particularly egregious. Andrews tried to urge them to come down and say their goodbyes but they were so busy hugging their fellow contestants that they didn't even get in their final words.

So even though I'll miss Lachey and Bella in the ballroom, and think that they deserve to still be there, that's the way it works sometimes. I'm sure they'll be fine.