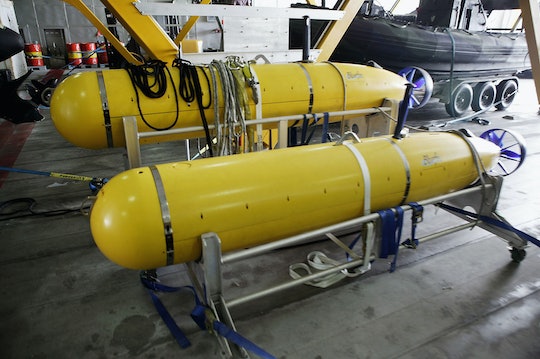 Why Was There A Fake Missile Warning in Hawaii? Thousands Of People Scrambled To Find Shelter

The people of Hawaii spent Saturday morning in a bit of a justifiable panic. Despite the fact that no sirens were sounding, no alarms could be heard in the air, people's phones were buzzing with a missile warning in Hawaii. Imagine how confusing, not to mention terrifying, such a warning must have been. Standing in a grocery store lineup on a Saturday morning, only to find everyone's phones buzzing with this incredibly ominous warning:

Ballistic missile threat inbound to Hawaii. Seek immediate shelter. This is not a drill.

This warning would be frightening at any time, but perhaps more so in the current political climate. Tensions between the governments of North Korea and the United States are at an all-time high over the nuclear testing of ballistic missiles at the Pyongyang nuclear site in North Korea. The behavior of both leaders, who seem hell-bent on dragging the rest of the world into World War Three with their incessant insults, hasn't exactly made for a relaxed climate either. So naturally, when people saw the warning of an incoming ballistic missile, they freaked out.

Fortunately, Hawaii's Emergency Maintenance Agency reported that this was a false alarm and there was no threat.

Still, imagine seeing this message pop up on your phone.

It was with no small measure of relief for residents and visitors to Hawaii when Hawaiian Rep. Tuls Gabbard shared this tweet about 15 minutes later, letting residents know it was indeed a false alarm:

While the people of Hawaii must have been relieved, many people started to question how, exactly, a fake missile warning of this magnitude could have been sent out to so many people?

As of Saturday afternoon, few details regarding the false missile mobile alert were available beyond Hawaii Emergency Management Agency spokesman Richard Repoza's announcement that the agency was attempting to determine the cause of the mistake. Hawaii Sen. Brian Schatz had this to say about the false alarm:

There is no missile threat. It was a false alarm based on a human error. There is nothing more important to Hawaii than professionalizing and fool-proofing this process.

Commander David Benham of the U.S. Pacific Command shared his own statement with CNN confirming that there was definitely not a missile:

USPACOM has detected no ballistic missile threat to Hawaii. Earlier message was sent in error. State of Hawaii will send out a correction message as soon as possible.

While the false alarm was corrected quickly, the thought of what could have potentially happened left some people cold. After all, it's only been a few days since North Korean leader Kim Jong Un threatened to attack the United States and insisted the military had missiles capable of reaching any city in the country.

As for President Donald Trump, who has taken to baiting the volatile North Korean leader by consistently referring to him as "Little Rocket Man" and threatening to attack the country with "fire and fury;" he was reportedly on the golf course in Florida when the false missile warning was announced. Which was, perhaps, a very good thing.

The good news is that the missile warning was a false alarm. The bad news is, thousands of people were left feeling helpless and petrified because of a supposed "human error." Left trying to protect their families, in some cases gong so far as to hide their children in storm drains to shield them from a potential missile attack.

The worse news is... this could have been so, so much worse than it actually was.

More Like This
Prince George Reportedly Got Sassy In A Fight With A Classmate
New Barney Docuseries Will Dive Into The Dark Side Of The Beloved '90s Kids' Show
What Parents Need To Know After DEA Issues Warning About "Rainbow Fentanyl"
You Can Stay At A ‘Hocus Pocus’ House On Airbnb — And It’s In Salem!