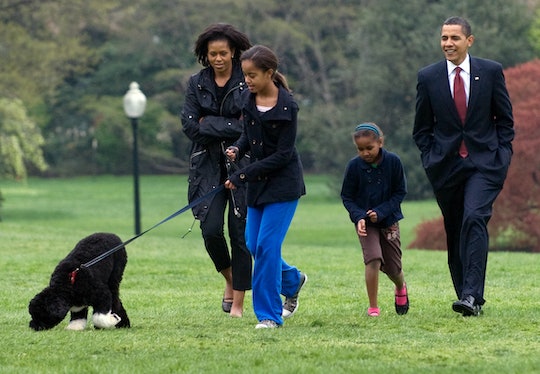 Why Sasha Obama Was MIA At The Farewell Speech

Sasha Obama has grown up with the eyes of a nation watching her. She was only 7 years old when her father became the 44th president of the United States eight years ago. We all recognize her instantly, her face is as familiar as any celebrity. And yet people watching President Obama deliver his final speech on Tuesday were left wondering: why wasn't Sasha Obama at the farewell address with her family?

The internet certainly took notice of Sasha Obama's absence at such a historic event, with speculation rife about where she could be, why she wasn't there, and how she could miss her dad's last big day at the office. The Obama family hasn't said anything about her absence, and let's get real here; Sasha Obama is a 15-year-old kid who has had to deal with being in the public eye for more than half her life. Could it be possible she just didn't feel like it? Because it's not technically her job to show up for her dad's work stuff (even if his work stuff is basically the biggest deal on the planet right now).

Romper reached out to the White House for comment regarding Sasha Obama's absence but did not immediately hear back.

Still, the internet is desperately trying to figure out where young Sasha might have been. And their theories are frankly amazing.

Like, maybe the tickets were too hard to come by. Even for family.

Or maybe she had a shift at the mall and she just couldn't get it covered.

Or could she have missed her father's beautiful, historic speech for an epic sleepover?

It truly is a shame Sasha Obama couldn't be there for her father's speech, whatever the reason might have been. In his emotional farewell address, Obama spoke of being a father to her and her older sister, Malia, as the one thing in his life that has made him the most proud:

Malia and Sasha, under the strangest of circumstances, you have become two amazing young women, smart and beautiful, but more importantly, kind and thoughtful and full of passion. You wore the burden of years in the spotlight so easily. Of all that I’ve done in my life, I’m most proud to be your dad.

So far, nobody has said exactly why young Sasha Obama was absent on Tuesday night. But perhaps it is as simple as this: Saying goodbye is hard when you're a grown-up. And it's even harder when you're just a kid. This is the only life she's known since she was only 7 years old. It must be emotional for her.

And maybe she simply didn't feel like sharing that with the whole world. That's OK.

Everyone still loves you, Sasha, wherever you were tonight.