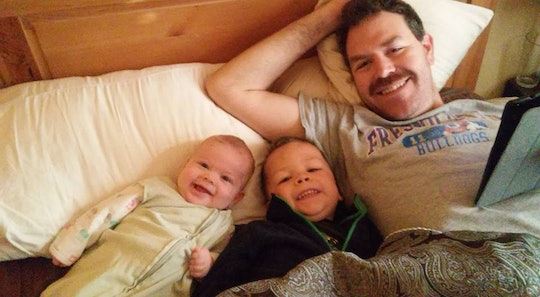 Why We Decided Not To Co-Sleep With Our Kids

I love to snuggle. Especially with my kids. They’re just so warm and cuddly, and they smell so good. Even when that good smell is tainted by a little bit of spit up buried in their neck folds, or they’re caked in sweat and dirt after a long day playing outside. I love to snuggle them, but I also really love my sleep. My passion for good sleep combined with my determination to reserve my bed for my husband and me alone is why we decided against co-sleeping. It’s a choice I’m happy we made and I haven’t looked back or regretted it once. Of course, there was another important factor that played into our decision against co-sleeping as well. Our babies were good sleepers. We were fortunate to have two babies who generally slept through the night at less than 2 months old. They were receptive going into their cribs at night and even seemed to enjoy their own space. But even if they hadn't been that way, we still would've decided not to co-sleep.

Long before our first son was even born, my husband and I made the decision to put our babies to sleep in their own space. My husband has always sprawled out on the bed, leaving me precisely half an inch of space to sleep in. He also likes to practically lay on top of me, crushing my every bone with his expansive love and frame. Clearly, our bed was not suited for a fragile and defenseless baby, and kicking my husband out of the bed never seemed like a good solution. So we decided against co-sleeping right from the start. And you know what? It's worked.

I’d read up on the benefits of co-sleeping. The renowned pediatrician Dr. Sears maintains that co-sleeping helps babies sleep more peacefully, facilitates easier breastfeeding, is safer than crib sleeping, and even promotes long-term emotional health. Then, of course, I read the argument from the other side: that co-sleeping drastically increases the risk of Sudden Infant Death Syndrome (S.I.D.S.) and the risk of a parent rolling on top of a baby.

Co-sleeping was clearly a respectable and understandable decision many parents make, but it just wasn’t right for our family.

Despite our best laid plans to choose not to co-sleep, we had no idea what kind of baby we’d be getting. There was nothing preventing the universe from laughing in our face and giving us a newborn who would only sleep in the comfort of someone’s arms. Or worse, who wouldn’t sleep at all for any length of time. We were one of those fortunate ones with a baby who slept well, but we were not one of those rare lucky couples who escape the nightmare preschool years. Even though our son continued to sleep well, he had frequent temper tantrums and even some violent outbursts, especially if he skipped a nap and became overtired. But even when the going got tough, we still didn't bring our son into our bed with us.

On several occasions when I did bring my newborn son into bed to breastfeed him back to sleep, my husband was startled awake by my bad dreams. I'd dream that the baby was falling off the bed and so I'd try to hold onto him to keep him there. In reality, that wasn't happening, but in my dreams, it was. And it was terrifying. I was just so scared that my husband or I would roll onto our baby or he’d topple off the bed that I couldn’t sleep restfully with him in the bed. By just six weeks old, he had started sleeping for six-hour stretches at night. At three months, we moved him into a crib in his own bedroom.

If he did wake up at night, he’d generally go back to sleep without a fight after a feeding. For naps, we’d lay him down awake, but sleepy, and he’d suck his thumb, roll over, and go to sleep. On occasions when he did cry softly, we’d let him fuss himself to sleep unless he grew progressively more agitated. I don’t consider that letting him “cry himself to sleep” because those fussy episodes were rare and mild. I imagine the task would be much more challenging with a truly wailing baby.

Going to bed alone together helps us put the focus back on our relationship.

My daughter, who arrived four years later, was also a good sleeper, even as a newborn. Having learned my lesson with my son, I forced myself to get out of bed to breastfeed her despite my exhaustion. After a couple of months, she was sleeping through the night in her bassinet and then in her crib. It helped that my kids had the comfort of their thumbs always with them to suck.

On the odd occasions when one of our kids get into bed with us, nobody sleeps well.

Now, at almost 5 years old and 1, they're still good sleepers. Waking them up in the morning for preschool and daycare is a daily battle of epic proportions. I take little credit for their good sleeping habits. They just like to sleep and appreciate their own space. Even so, I’m glad we stuck with our decision to not co-sleep.

I feel that for my kids, the decision has reinforced their independent natures, and has shown them that they have the tools to comfort themselves. My kids know we’re just down the hall if they need us, and I’ve spent many nights responding to my son’s calls for another drink of water.

We make sure to allow time for snuggles, too, and relish cuddling up in bed with each of our kids and reading them books at night. Then, we get up and leave. They rarely come into our room in the middle of the night. On the odd occasions when one of our kids get into bed with us, nobody sleeps well and there are lots of limbs jabbing body parts. We do all enjoy morning cuddles in our bed, though.

Our decision not to co-sleep has also benefited my marriage. It's allowed us to have some alone time together at night, and this time together is especially needed after a long day of work and kids. Without that time, we wouldn't be able to unwind together, to talk, to crack jokes the kids shouldn't hear. Romantic relationships are too easy to put on the back burner during a busy period of life, and going to bed alone together helps us put the focus back on our relationship, bed-hogging and all.

We decided not to co-sleep, and you know what? We're all sleeping a little more soundly because of it.